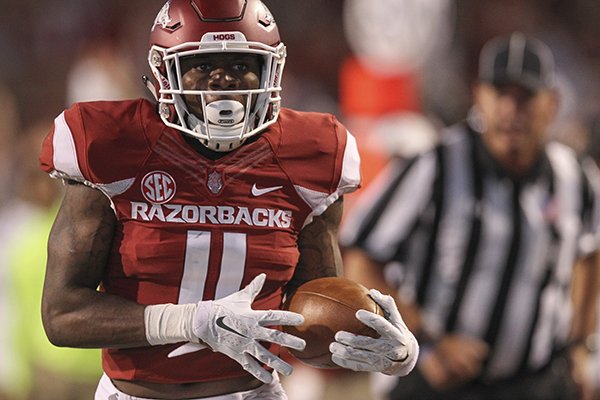 Arkansas cornerback Ryan Pulley scores a touchdown during a game against Texas State on Saturday, Sept. 17, 2016, in Fayetteville.

FAYETTEVILLE -- Arkansas went 16 games without having one of its players return an interception for a touchdown.

Now it's happened in back-to-back games.

Ellis was the first Razorback who scored on an interception since Rohan Gaines had a 100-yard return against Ole Miss quarterback Bo Wallace in Arkansas' 30-0 victory over the Rebels in 2014.

Ragnow moved from center to right guard with Raulerson moving from right guard to center.

Both players were in a familiar spot. Ragnow started all 13 games last season at right guard. Raulerson, a graduate transfer from Texas, played primarily center for the Longhorns.

Sophomore Brian Wallace replaced Jackson at right tackle for Arkansas' second and third series, then Jackson was back in for the fourth series.

Jackson and Wallace continued to split playing time as the game continued.

Sophomore Zach Rogers played center in the second half.

Arkansas improved to 24-1 against teams currently in the Sun Belt Conference by beating Texas State in the Razorbacks' first game against the Bobcats.

Louisiana-Monroe is the only Sun Belt team to beat Arkansas, 34-31, in overtime at Little Rock in 2012.

Jeremy Sprinkle's 10-yard touchdown reception from Austin Allen in the second quarter was the Arkansas senior tight end's seventh touchdown in the past six games, including all three games this season.

Missouri is the only team in that seven-game span to keep Sprinkle out of the end zone.

Sprinkle scored three touchdowns against Mississippi State and one touchdown against Kansas State in the Liberty Bowl last season. He has one touchdown catch in each game this season against Louisiana Tech, TCU and Texas State.

Wait over for Winston

Winston, playing in his 43rd game, sacked Tyler Jones for a 10-yard loss in the third quarter on a third-and-7 play from the Arkansas 17 to force the Bobcats to settle for a field goal.

It took Arkansas senior Keon Hatcher one play to extend his streak of receptions for a first down to 22 games.

Hatcher caught a pass from Austin Allen for a 14-yard gain on the game's first snap. He capped the scoring drive with a 9-yard touchdown pass from Allen.

Arkansas junior wide receiver Jared Cornelius didn't dress out because of a sore back. He caught three passes for 30 yards in the first two games.

What first was ruled a 73-yard touchdown pass for Austin Allen to Keon Hatcher in the first quarter was overturned on review by replay officials.

Hatcher instead was ruled to be down at the Texas State 1, and the ball was placed about 6 inches from the goal line.

Kody Walker, lining up at fullback, took a handoff from Allen and scored on the first play after the review.

A 54-yard fumble return for a touchdown by Arkansas defensive end JaMichael Winston was overturned by the replay officials and ruled an incomplete pass by Tyler Jones.

It appeared to be a good call watching the replay, with Jones' arm going forward when the ball was knocked loose by defensive tackle Jeremiah Ledbetter.

If things had turned out differently in Texas State's coaching search, Paul Rhoads could have been on the visiting sideline Saturday night instead of in the home team's coaches' booth.

Before taking the job at Arkansas, Rhoads was a finalist to be the head coach at Texas State, which had an opening after the retirement of Dennis Franchione.

Texas State hired Everett Withers, who as the head coach at James Madison led his team to an 18-7 record and a spot in the Football Championship Subdivision playoffs in 2014 and 2015.

Junior offensive lineman Jake Raulerson carried the United States flag, and junior holder and deep snapper Matt Emrich carried the Arkansas flag when the Razorbacks ran onto the field before the game.

Arkansas paid Texas State a $1 million guarantee for Saturday night's game, according to a report in the San Marcos (Texas) Daily Record has reported.

It is the second $1 million guarantee for an Arkansas opponent along with Toledo last season, when the Rockets beat the Razorbacks 16-12 in Little Rock.

Technically, it was half a sack. Capps and Deatrich Wise each were credited with sacking Tyler Jones on a play in the first half.

Bret Bielema improved to 39-4 in nonconference regular-season games in his 11 seasons as a head coach at Wisconsin and Arkansas.

The four losses were at Oregon State in 2012 during Bielema's last season at Wisconsin, at Rutgers in 2013, and to Toledo in Little Rock and Texas Tech in Fayetteville last season.

Texas State is in its fifth season playing on the Football Bowl Subdivision level. The Bobcats played in the Western Athletic Conference in 2012 in their FBS debut before moving to the Sun Belt.