Hold on to the ball: coaches try to keep players from throwing back TDs 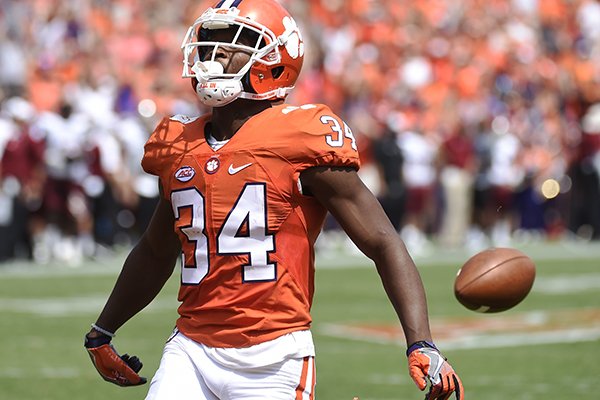 FILE- In this Saturday, Sept. 10, 2016, file photo, Clemson wide receiver Ray-Ray McCloud drops the football short of the goal line during the first half of an NCAA college football game against Troy in Clemson, S.C. A few college football players took the nonchalant approach to entering the end zone too far in the last couple weekends, casually dropping the ball right before crossing the goal line. With goal-line brain freezes seemingly spreading, some coaches are taking action keep this case of the dropsies from becoming an outbreak. (AP Photo/Rainier Ehrhardt, File)

NEW YORK — The old saying goes, "When you score a touchdown, act like you've been there before."

A few college football players took the nonchalant approach too far when entering the end zone the last couple weekends, casually dropping the ball right before crossing the goal line. It cost Clemson and California touchdowns and should have taken six off the board for Oklahoma, too. With goal-line brain freezes seemingly spreading, some coaches are taking action to keep such case of the dropsies from becoming an outbreak.

"It's something that doesn't need to happen, I can tell you that," South Carolina coach Will Muschamp said. "We've had a hard time getting (to the end zone). We dang sure don't want to drop it before."

The madness started this season with the Gamecocks' in-state rivals. Clemson's Ray-Ray McCloud cost himself a punt return TD two weeks ago against Troy when he dropped the ball a stride short of pay dirt . McCloud got chewed out by coach Dabo Swinney but was allowed to keep playing and has been a productive player since.

Not everybody has learned from McCloud's mistake.

Oklahoma's Joe Mixon and California's Vic Enwere made similar moves last Saturday. Officials did not catch Mixon's and the long TD stood. Enwere lucked out in that officials ruled that no effort was made by Texas to recover his fumble. The whistle was blown and the Bears retained the ball at the 1 and ran out the clock on a victory.

Enwere's gaffe prompted Cal coach Sonny Dykes to implement a new rule when the team met Sunday. Cal players must hand the ball to an official after scoring.

"It's really a strange phenomenon," Dykes told USA Today Sports . "I don't understand it. But I can assure you it won't ever happen to us again. We'll get it fixed."

Arkansas coach Bret Bielema said it's not just near the goal line that he see players being too quick to discard the football. He still uses a message to players that he took from his former running backs coach, Jemal Singleton.

"He said any time a ball carrier has the ball in his hands, it's a fumble unless it's handed to the official," Bielema said. "We had a flare-up in our first game where some guys were dropping the ball on the ground, or they were flipping the ball out. For the most part, you'll see our offensive players, if there's a referee or anybody in sight, hand the ball to the official — especially on scoring plays. It's the easiest way to take away from any type of celebration, anything along that lines."

Bielema said a clip of Enwere's drop will likely make its way into Arkansas film study this week to reinforce the point.

Arizona coach Rich Rodriguez already has a rule in place about handing the ball back to officials on every play, mostly so the offense can move at a quick pace.

"We call it the Kansas City rule," Rodriguez said. "I think 15 years ago, (offensive coordinator Calvin Magee) and I heard about the Chiefs doing it, making it mandatory for all their ball carriers."

And what would the punishment be for breaking the Kansas City rule while cruising into the end zone?

"Well, the things I would like to do I can't say," Rodriguez said.

These goofy goal-line giveaways are not a new phenomenon.

Former Cal receiver DeSean Jackson might be patient zero when it comes to toss-back-a-touchdown disease. He's done it twice in the NFL with two teams and also did it in a high school all-star game while front flipping into the end zone.

Nobody's flub was more costly than Kaelin Clay's in 2014. Instead of scoring a long touchdown for Utah, an Oregon defensive player alertly picked up the ball before it was ruled dead and returned it 99 yards for a flip-six.

A word of caution before branding this apathetic approach to reaching the end zone another example of widespread millennial entitlement: Plenty of college football players are taking a traditional approach when scoring that would make low-key Hall of Famer Barry Sanders proud.

"I either run all the way to the end of the end zone and then celebrate, or I just don't do anything at all," Iowa State running back Mike Warren said. "That's just how I am."