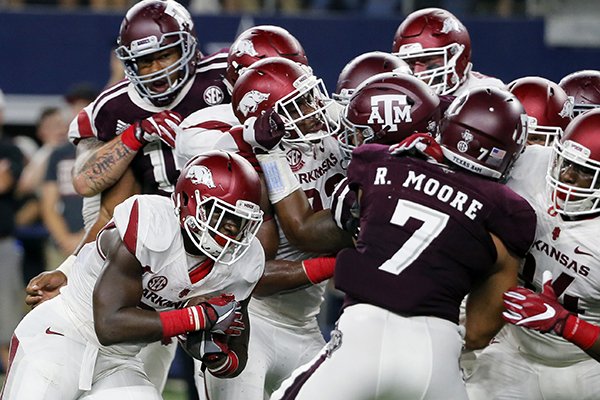 ARLINGTON, Texas — Before the season started, analyst and former LSU football star Booger McFarland went on the Sports Talk with Bo Mattingly show in Fayetteville and described Texas A&M as “soft as tissue.”

The No. 10 Aggies beg to differ and said as much after taking down the No. 17 Razorbacks 45-24 Saturday night before 67,751 fans at AT&T Stadium in the sixth annual Southwest Classic.

“We weren’t just going to let them walk it in,” Texas A&M head coach Kevin Sumlin said. “It’s been a long time around here since that’s happened around here.”

With the score tied 17-17 in the third quarter, Arkansas used 19 plays to drive 89 yards on a possession that latest over 10 minutes.

But after getting to the Texas A&M 2-yard line, the Razorbacks gained only one yard on the next three plays with two of them being quarterback sneaks.

Keon Hatcher was thrown for a 5-yard loss on a reverse when the Razorbacks chose to go for it on fourth down instead of kicking a field goal.

“I mean on the goal line, we don’t even want them to get that far on the field,” Texas A&M defensive end Daeshon Hall said. “It’s just a brotherhood. We weren’t going to give up on the play. Everybody was playing for each other. We executed well and got a big-time goal-line stop.”

Aggie defensive back Armani Watts noted that his team expected the reverse.

“Really, on the end around, we prepared for that in practice, watched it on the film, seen it a couple of times,” Watts said. “We stopped them three times before on the goal line so we knew they were going to come with something tricky.”

“I don’t know exactly how far it was, but it was a momentum changer,” Knight said. “…We had been kind of stalling there a little bit, stalling a bit when we got backed up. And to hit a big-time play like that is a big-time momentum change.”

The Aggies then quickly added two more touchdowns with a 33-yard scoring dash by Trayveon Williams (12 carries, 153 yards) and a 9-yard scoring toss from Knight to Christian Kirk to go up 38-17 with 10:25 left in the contest.

“Just happy for our players,” Sumlin said. “You know in a situation where it was a tight game, I thought we made some adjustments at halftime.

“As a staff, I thought our coaches did a great job of explaining the plan, but also guys executing, playing in the second half. It wasn’t always pretty. It wasn’t perfect.”

Arkansas quarterback Austin Allen was 28-of-42 passing for 371 yards with two touchdowns while taking several big hits that earned him respect from Sumlin.

The Razorbacks were 9-of-16 on 3rd down conversions.

“Give Arkansas credit,” Sumlin said. “They had a plan and the plan was a good plan to block our ends as we have seen and give Allen enough time. What a tough guy he is because he took some shots today and stood in there and throw some good balls.

“That team, I mean he showed a lot. I mean he was accurate and their guys made some plays.”