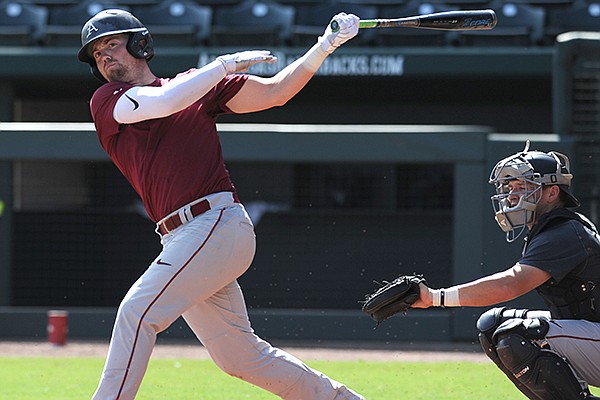 It isn't every day you see them transfer back.

That's the case for Arkansas infielder Blake Wiggins, the former Arkansas high school player of the year who is back with the Razorbacks this fall. Wiggins transferred from Arkansas to College of Southern Nevada last year.

Wiggins, a Little Rock native who played high school baseball at Pulaski Academy, was part of the Razorbacks' 2015 College World Series team, but only played in three games because of a foot injury suffered early his freshman year. He received a medical hardship and has three years of eligibility remaining, although he is draft-eligible this year.

It was his desire to play pro baseball that led him to junior college, where draft eligibility requirements are different than the NCAA. Southern Nevada is considered one of the top JUCO programs in the country and has produced multiple MLB players since 2008, including Bryce Harper.

Wiggins played well there. He batted .315 with 12 home runs and 59 RBIs in a wood bat league. He was named all-district, but didn't turn enough heads to be drafted.

Meanwhile back at Arkansas, the Razorbacks were struggling at third base. Bobby Wernes' breakout 2015 season led to him being drafted higher than expected and leaving for pro ball a year earlier than coaches anticipated.

By the time Wernes signed with the Astros, Wiggins had already committed to junior college.

"I figured Bobby would be playing third base again the next year and I wanted to go somewhere where I could play and mature," Wiggins said. "I thought for sure Bobby was coming back, then next thing you know he signs and they don't have anybody left."

Arkansas tried several options at third base in 2016, including Carson Shaddy, who had converted from catcher and was cleared less than eight months after undergoing Tommy John surgery. But Shaddy struggled with errors and other options never stuck.

Wiggins said Arkansas coach Dave Van Horn initiated the contact about returning. They had split on amicable terms the year before, so the interest was mutual.

"About three-fourths through the year, Coach Van Horn called and said, 'It looks like you're having a really good year out there,'" Wiggins said. "He wanted to know if I was going anywhere yet and said, 'If you're looking around, we'd love to have you back.'

"This is where I always wanted to be. Every Arkansas kid's dream is to play here. When I left it was tough because I had family here and a girlfriend here, and going out to Las Vegas was a long way from home."

Wiggins is getting his chance at third base this fall along with freshman Jaxon Williams and transfer Hunter Wilson, who was a starting infielder at Stephen F. Austin in 2015. Wilson is also a leading candidate to start at shortstop. 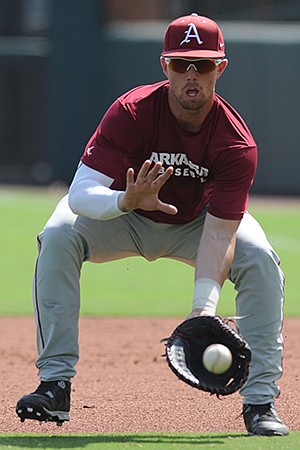 Wiggins is getting a chance at third base this fall, but projects at other positions. (Photo by Andy Shupe)

Every infield position is open for the taking this fall. The Razorbacks lost starting middle infielders Rick Nomura and Michael Bernal to graduation, and first baseman Clark Eagan to the draft.

"It's much more competitive at every position this fall than it was last year," Arkansas assistant coach Tony Vitello said. "Really there are a ton of interchangeable parts.

"It's nice to have athletes who can bounce around a couple of different positions."

Wiggins is among the team's most versatile players. He was a shortstop in high school and also has a background as a catcher.

He is also working some at first base this fall and potentially profiles as a left fielder professionally.

"He's versatile, but it's probably been difficult to him because he has never been able to settle into one position and master it," Vitello said. "Coach has given him every opportunity in the world to get reps at third this fall.

"I think his ambition is to show us he can play that position. Third base has a little bit more diversity to it. It's a lot easier to be a third baseman who can play first as opposed to a first baseman hoping to play somewhere else. Ultimately, a guy like him who is not a big-time runner and not a great defender like Bobby, he's going to have to do it with the bat."

Based on fall scrimmages, the bat should get Wiggins into the lineup next season. Among his highlights this fall was a 3-run home run in a scrimmage last Wednesday that was a no-doubter to left field. The hit came off Brenden Heiss, a freshman right-hander who was drafted earlier this year by the Pirates.

"He's made a name for himself with his bat and that's what he's going to do for us," Vitello said. "It's a very competitive fall, so to stand out he needs to do things like he did (last Wednesday) when he drove one pretty good."