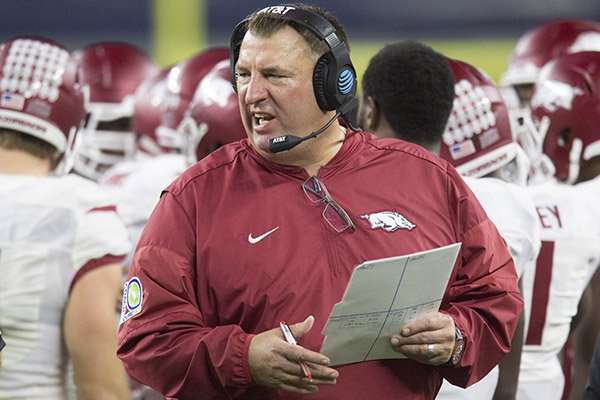 Arkansas coach Bret Bielema looks on during a game against Texas A&M on Saturday, Sept. 24, 2016, in Arlington, Texas.

FAYETTEVILLE — Bret Bielema began his Thursday radio show with another thought about what quarterback Austin Allen means to the Arkansas football team.

“I think what you saw in the last game and going back to others this year, you know you have a chance to win every game,” said Bielema, the Arkansas head coach. “The guys in our locker room have seen that he's one tough son of a gun.”

Bielema said there were two things about the 45-24 loss to Texas A&M that were disappointing, not being able to score from close range and the big plays given up on the quarterback run.

“I didn't think they would hurt us in the throwing game and they didn't except for one play,” Bielema said. “But we did give up too much in the running game. The other thing, not being able to get it in on the goal line.”

The Hogs travel to Little Rock on Saturday to play Alcorn State in the final nonconference game of the season. Kickoff is at 11 a.m.

“One of the things we talked about is that we are almost to the halfway point of the season, this is game five,” Bielema said. “We talk about the 1-0 mentality. It's important every week, but especially important when you are coming off a game like last week.

Bielema said the Braves feature an offense similar to TCU as far as pace of play.

“They are like that as far as what they do,” Bielema said. “They do huddle, but they do it at the line. They have had two quarterbacks, a junior who is the better passer. He's been hurt and then they have a freshmen and they look to the run a little more just because of experience.”

Bielema was asked about the medical tent, used for the first time by the Hogs at AT&T Stadium. He said Arkansas had the tent all season, but has been unable to use it at previous venues because it restricts the fans' line of sight.

He was unsure whether the NCAA would legislate using tents in the future. Alabama was the first team to use such a tent.

“I noticed it a couple of weeks ago by a road team in the SEC,” Bielema said. “There are several considerations to using it. Each stadium is different and you have to get approval based on sight line from the stands. We won't be able to use it in (War Memorial Stadium) and we weren't able to use it at TCU. There were no sight line problems last week.

“What goes on in there? You guys think we are trying to conceal something? Actually, there are things you can do there that you probably wouldn't if you didn't have it. For instance, there are times you need to remove your uniform for something. There are two ways to deliver an IV and some of them is below the waist. Lets just say that's the PG explanation.”

Bielema was asked about the death of Kyler Williams, the Springdale High School wide receiver. How did it affect the Razorbacks? Many played with and against him in high school.

“The young man that it really affected was (freshman quarterback) Jack Lindsey,” Bielema said. “He played with Kyler last year. In fact, that's how we heard about it, from Jack through Barry Lunney. I was alerted about it early Sunday.

“I can tell you that it hit a lot of our players hard. We've talked about it. Our players are really aware of what happened. I remember just two weeks ago that I had my picture taken with Kyler on the sideline. We as a team shared a lot of stories about Kyler.”

Bielema was asked about recruiting needs.

“I can tell you the two hardest positions to recruit are defensive line and cornerback," Bielema said. "There are not many SEC caliber defensive linemen. We've built that area up. That's one of our biggest concerns.”

Bielema thinks offensive line numbers have improved, but there is still development to be done.

“One of the things you look at and remember, we had to play Dan Skipper as a true freshman,” Bielema said. “You know they are going to play their best football as a senior, and we could use Dan another year, but we had to play him as a freshman.

“We also probably miss Denver Kirkland the most of the players we lost. He was undrafted and we think about what we do in development. We do a good job of avoiding attrition. We do have good numbers in the offensive line and defensive line.

“You do always need more at cornerback and at safety. We are a little bigger there than we have been.”