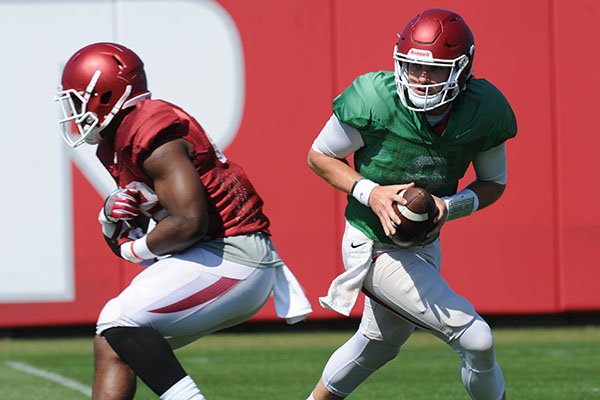 Arkansas quarterback Austin Allen rolls out to pass Saturday, April 1, 2017, during practice at the university practice field in Fayetteville.

Allen had an impressive first day in pads operating with the first-team offense on a bright, warm Saturday at the Razorbacks practice fields.

Bielema made comparisons to the progress of former three-year starter Brandon Allen, who has been around the program all week.

"B.A. was out there," Bielema said. "A lot of you guys witnessed the jump he made from Year 1 to Year 2 as a starter. ... I think that big jump started into his junior year, and I see the same thing with Austin. His velocity on the ball -- he threw about a 45-, 50-yard strike on a rope pretty good in Thursday's practice that I didn't really see until I watched film and today he made some really nice throws into tight windows."

On Thursday, Enos touted Allen's calmness and his attention to detail.

The first player to be removed from the field for using excessive force was no surprise, as safety DeAndre Coley got the boot from Bret Bielema after a play in skeleton drills.

The hyper-aggressive Coley lowered the boom on Hayden Johnson after the tight end caught a short out route from Austin Allen at the start of period 10.

Earlier in the practice, Coley jumped an Allen pass and nearly picked it off.

"Yeah, I needed him to make the pick," Bielema said of the earlier play. "He made a nice play over there on the sideline, but I'd rather have him come up with the football. And obviously ... he got a little aggressive. We've got to practice well with one another.

"The good thing is, he's a very aggressive player by nature, but we've gotta make sure we can all play this game together."

Johnny Gibson, a redshirt junior who started the final five games last season at right guard, took reps with the second-team offensive line after being limited to individual drills the first two days of spring.

"We let Johnny Gibson work back into the lineup," Bret Bielema said. "He won't work with the ones any time this spring, but he looked really good when he was going in there with the twos."

Bielema said Gibson's demotion at the start of practice had to do with re-earning trust with the coaching staff after being put on scholarship before the Belk Bowl.

"Johnny obviously did some good things, but just a trust factor there that I have to get on the same page with him," Bielema said. "I gave him a scholarship. I expect him to do everything we're asking him to do on the field and off the field. He's got a chance to re-prove himself and he's doing a good job."

It didn't take long for the Razorbacks to break into their first "Hog drill," the one-on-one match-ups between players of roughly equal stature.

Safety Santos Ramirez received plenty of accolades for his performance against a receiver. On the other side of the field, offensive lineman Deion Malone was hyped up after winning his rep at the end of the period.

Bret Bielema said the state legislature's vote last week to prohibit firearms inside on-campus athletic venues "put a lot of people at ease, from ticket holders to players, to fans, to parents, to moms and wives."

Bielema said he intentionally kept a low profile on the issue.

"I thought we'd probably get to a point where we are, we just had to work through it," he said. "One of the greatest things I've ever learned in life is don't worry about what you can't control. Obviously they weren't calling me and asking for my opinion or my vote, so I just sat back and watched how things unfolded."

Fullback Kendrick Jackson and tight end Austin Cantrell both had two or three explosive lead blocks during a team period.

Jackson had probably the loudest hit during the "thud" periods available for viewing by the media, when he crashed into one defender and created a domino effect.

"Today he took out two guys in one play that he just kind of put his shoulder down and knew he could be physical and make a play, and I think the running backs see that and they like playing behind that," Bret Bielema said.

Bret Bielema gave an extended answer to a question last week about the importance of the current recruiting class.

"You guys that really follow it know this is a small class compared to last year's," Bielema said. "We still have an opportunity for one more in last year's class. But this year's class will be a lot of guys that are high on our list.

"Obviously, I can't talk specifics, but we have not received a commitment from anyone that hasn't been the No. 1 person on our board. It's going as solid as solid gets."

Bielema touted the strength of his current alignment of assistant coaches as well.

"This is the best recruiting staff I've ever had," he said. "They're very diligent, they understand it. My two new guys, even though they came out of the NFL, they're very tech savvy, they're very into recruiting, they've got great personalities."

He also touted the work of recruiting coordinator E.K. Franks and the holdover coaches from 2016.

"My old staff knows what the expectation level is. E.K. has done a nice job of doing a lot more things with Facetime," Bielema added.

Senior quarterback Austin Allen was complimentary of all the other quarterbacks on the roster last week. His first impressions of quarterback signee Daulton Hyatt were noteworthy.

"Yeah, he's a fiery guy," Allen said of the 6-4, 180-pounder from Attalla, Ala. "He might be a little bit laid back here or there, but he's a competitor. He's a little skinny right now, but he's picking up the offense pretty well.

"He came from the Spread offense, so he's got to learn how to take a snap under center. The way he works and the way he competes out there, I think he'll have a special career here."

Hyatt, who is behind Allen and co-second teamers Ty Storey and Cole Kelley, is likely in line for a redshirt season in 2017.

"What that does is it gives us a chance to focus on our individual stuff," Hargreaves said. "A lot of people will have all four of them together and they've got to talk outside guys and inside guys.

"We can really focus in on the ins and outs of each position. We can get more in depth and spend more time on it."

A group of seven prospects along with their family members were guests at the late morning workout, as was an entire youth baseball team.

"For us, these Saturday practices are huge to get guys on campus for unofficial visits," Bret Bielema said. "We had a lot of those guys on campus, in-state and out-of-state, so it was a really good day for us in recruiting as well."

• Junior Cole Hedlund received plenty of congratulations after booting a 48-yard field goal to wrap up the special teams period.

• The Razorbacks are scheduled for practice No. 4 of the spring Tuesday.