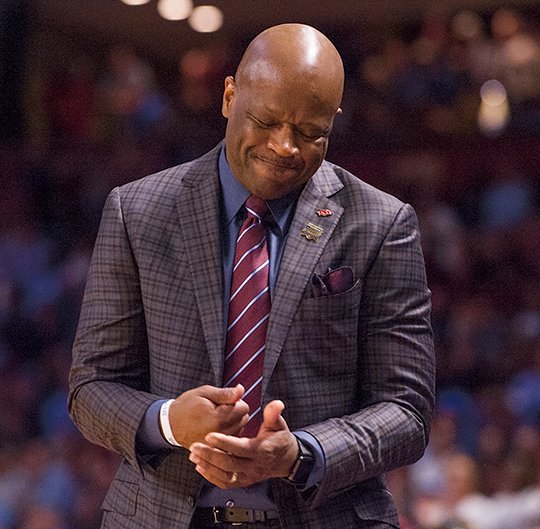 NWA Democrat-Gazette/J.T. WAMPLER TOUGH FINISH: Arkansas head coach Mike Anderson pounds his fist during the second half against North Carolina March 19 during the second round of the NCAA Tournament at the Bon Secours Wellness Arena in Greenville, S.C. With the season over due to the Hogs' loss to the Tar Heels, Anderson has three major contributing seniors that he will have to replace for next season.

Arkansas and guard transfer Michael Weathers have mutual interest and an official visit appears to Fayetteville be in the works.

He announced on March 28 his intentions to transfer from Miami of Ohio. Weathers averaged 16.7 points, 4.8 assists, 4.2 rebounds, 1.9 steals and 1.4 blocks this past season and was named the Mid-American Conference Freshman of the Year.

“He was talking to me about Arkansas and my level of interest in them,” Weathers said. “I was interested in them when I was a senior in high school, but my grade situation wasn't right so I had to somewhere else.”

He spoke to Coach Mike Anderson about 5:15 p.m. today.

“He said he liked the way I played,” Weathers said. “He liked my style of play- my type of game. He said he loves athletic guards which I am and they run up and down. He just told me their style of play and stuff like that.”

He played at Shawnee Mission North High School in Kansas and was the all-time leading scorer with 1,626 points and all-time leader in steals with 18.9. He averaged 20.9 points, 4.6 rebounds and 3.4 assists a game as a senior.

“I have huge interest in them,” Weathers said of the Hogs. “It’s close to home. They’re only three hours from my home. I’ve always wanted to play somewhere near home. Them coming into the picture plays a huge role.

“They’ve always fit my style of play-fast pace and up and down.”

Weathers had reported official visits lined up to Boise State on April 14-15, Miami on 18-19 and Xavier 20-21, but it looks like some shuffling of dates and schools could happen.

“We had to reschedule the Miami visit. Xaiver is still set,” he said. “But Boise I don’t know. I might change that one.”

He and the Hogs have discussed an official visit to Fayetteville.

“Me and coach Cleveland and coach Anderson talked about getting me down there for an official sometime soon,” he said.