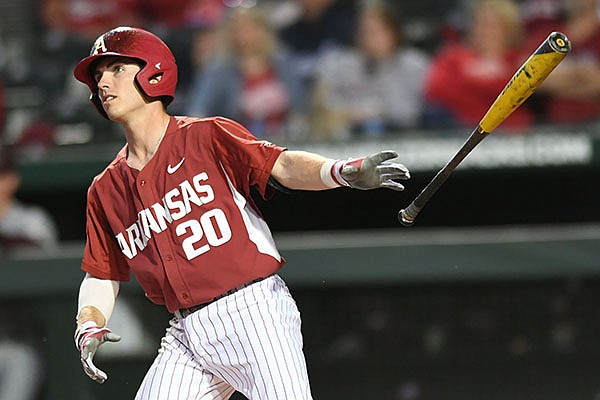 FAYETTEVILLE — Much of Arkansas' offensive success this season can be attributed to the home run.

Almost half, to be exact.

The Razorbacks lead the SEC with 40 home runs entering their weekend series against LSU - a figure greater than the number of the home runs Arkansas hit in any year between 2011-14 when deadened bats significantly decreased offensive production across college baseball.

But Arkansas' power surge this season isn't the result of an equipment change. The last major change to the college game came prior to the 2015 season when baseball seams were lowered, which offset some of the impact of the BBCOR bats implemented four years earlier.

For instance, the Razorbacks didn't hit more than 39 home runs in a season between 2011-14, but hit 53 and 49 in the two seasons preceding this one.

Instead, Arkansas' long-ball success this year is the result of better hitters in the lineup, known on Twitter as the #SooievilleSluggers.

The team's top and third-leading home-run hitters are sophomore catcher Grant Koch - a backup for most of last season - and freshman center fielder Dominic Fletcher, with 8 and 6, respectively. First-year players, including Fletcher, have combined to hit 11 home runs.

"They have contributed a lot, big time," Arkansas coach Dave Van Horn said. "I mean it’s been a weapon for us.

"We knew Fletcher had potential to hit some home runs. It’s definitely won us some games. It’s probably won us almost double-digit games when you think about it." 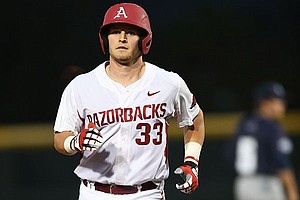 Sophomore catcher Grant Koch leads the team and is fourth in the SEC with 8 home runs. (Photo by Andy Shupe)

HRs by the Years

Here is a look at home run totals for Arkansas each year under Dave Van Horn.

Among the wins Arkansas can chalk up to the home run:

The Razorbacks hit five home runs during a 13-10 win over Louisiana Tech last month in a game they trailed by nine runs at one point. Those five home runs accounted for eight of the team's runs scored.

Arkansas beat Mississippi State 3-1 in the SEC opener for both teams three weeks ago. All the Razorbacks' runs in that game were a direct result of a home run - a two-run homer by Luke Bonfield in the first inning and a solo shot by Koch in the sixth.

Arkansas relied on the home run again the next night when it beat the Bulldogs 5-4. All five of the Razorbacks' runs were the result of home runs by Carson Shaddy and Chad Spanberger in the second inning.

"We put people away with home runs and come back with home runs," Van Horn said. "It’s always there and the other team knows that we have the potential to hit a home run, but we try not to live and die with it.

"We don’t talk to them about hitting home runs. It’s just something that happens."

A home run has accounted for the winning margin in six Arkansas games this season and served as a spark in several more.

"When the other team scores, I'd like to count up that number, but we've punched back countless times," Arkansas hitting coach Tony Vitello said. "A guy like Fletcher makes an error (in the first inning of the series finale at Missouri) and he came in the dugout, and he was hot. Next thing you know, he's up first the next inning and he hits a home run.

"It's huge for the dugout morale. It really helps the pitching staff knowing that if they give up a run, the offense is going to punch right back."

Arkansas hasn't only been feasting on nonconference pitching. The Razorbacks are averaging 1.5 home runs per nonconference game and 1.11 per game against conference opponents.

The Diamond Hogs have hit 10 home runs in SEC games, the second-most in league-only games behind Vanderbilt (14).

It's a similar situation in which Arkansas found itself last season before a horrible final month that included 13 straight losses to end the season.

"Last year, Texas A&M had that explosive offense - probably the best in the SEC," Vitello said. "We were right behind them in second place in home runs for quite a while. Once the Kentucky series wrapped up (in April) and that big downward spiral started, it was everything. The pitching went bad, the hitting went bad, the fielding got worse, and the power numbers just kind of declined."

"There was some pop in the lineup last year, but not as much as this year," Vitello said. "The numbers get elevated when you have a team playing together like this team has. Last year we were just short in that competitiveness and in a lot of areas, and the power numbers suffered." 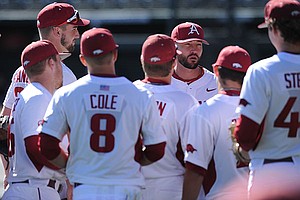 Arkansas previewed the power it has shown during fall practice last September and October. Most scrimmages featured multiple home runs, including all three of the team's Cardinal-Gray scrimmage when rosters were chosen by coaches to maximize competition.

"If you came to a fall scrimmage, you saw it was hard to throw to them," Arkansas pitcher Cannon Chadwick said. "They would put it out of the yard like they're doing now.

"They aren't taking big swings. They're hitting line drives and they're going out."

Coaches emphasized hitting line drives during the fall. With the help of the TrackMan system installed by new pitching coach Wes Johnson, coaches were able to analyze data sets for each pitch and swing.

TrackMan follows the trajectory of the ball similar to a tracker you might see on the tee box during the TV coverage of this weekend's Masters tournament. It makes it easy to differentiate between a ball hit well and one hit poorly.

"We've actually discussed how many home runs are line drives," Vitello said. "During the season we'll keep track of how many times we fly-out; a true fly ball that has a lot of air under it and is easy for the outfielder to catch. We want to keep that number low. There isn't an emphasis on the home runs, but more on just making sure what your best attributes are, they come out in your at-bats."