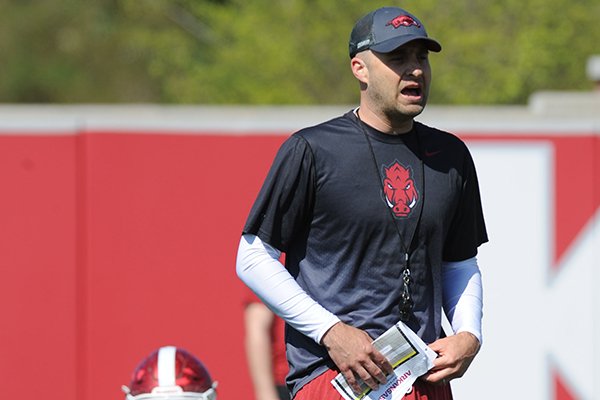 "He contacts me every day and just seeing how I'm doing and how my grades are," Bishop said. "He's on me every single day."

"It shows me how much love he has for me," Bishop said.

The Hogs signed safety, teammate and cousin Montaric Brown in the 2017 class. Bishop said Brown is in his ear.

His college decision could be coming in a few months.

"Maybe some time during the summer," Bishop said.

Cornerback Ar'Darius Washington, 5-9, 168, 4.57 seconds, and linebacker Micah Baskerville, 6-2, 216, both of Shreveport Evangel, pledged to the Tigers in February.

They enjoyed their experience in Fayetteville and indicated they will probably be back for the spring game April 29. Washington said the players made him feel at home.

"They seemed like they are cool," Washington said. "There weren't any stuck-up players or anything like that. Anything we asked they would tell us the truth."

The two talked to junior safety Santos Ramirez and senior receiver Jared Cornelius, who is also from Shreveport Evangel.

"The Louisiana guys at Arkansas kept it straightforward with us," Washington said. "We felt like we were like one of them already. They made it feel like it was home even though we just met them that day."

LSU and Arkansas are among Washington's 12 scholarship offers. He said there's no way of saying whether the visit was enough to make him think of flipping his commitment to the Hogs.

"I don't know," Washington said. "I enjoyed it, I can tell you that. I really haven't just sat there and thought about it."

Washington admired the way the coaches interacted with him.

"The coaching staff is so honest," Washington said. "I know it's their job, but the coaches honestly wanted us there. Even if we didn't pick them, they gave us some insight on how to approach certain situations."

"They made us feel at home," Baskerville said. "The players made it feel like I was one of them."

Louisiana native and Hog receivers coach Michael Smith is the lead recruiter of Washington and Baskerville.

"He's a cool guy," Baskerville said. "He understands the process and everything. He understands us kids well. He talks to us like we're one of his. He's a real good guy."

Baskerville reports scholarship offers from LSU, Arkansas, UCLA, Colorado State, Central Florida and others. He and Washington were able to watch the Razorbacks practice.

"They were getting after it, I tell you that," Baskerville said.

The basketball Hogs and guard transfer Michael Weathers have mutual interest, and an official visit to Fayetteville is in the works.

He announced his intentions to transfer from Miami of Ohio on March 28. Weathers averaged 16.7 points, 4.8 assists, 4.2 rebounds, 1.9 steals and 1.4 blocks this past season and was named the Mid-American Conference freshman of the year.

"He was talking to me about Arkansas and my level of interest in them," Weathers said.

"He said he liked the way I played," Weathers said. "He liked my style of play, my type of game."

He played at Shawnee Mission North High School in Kansas and was the all-time leading scorer with 1,626 points.

"I have huge interest in them," Weathers said of the Hogs. "It's close to home."

Weathers, who was recruited out of high school by director of operations Matt Zimmerman while he was an assistant, reported official visits lined up to Boise State on April 14-15, Miami (Fla.) on April 18-19 and Xavier on April 20-21, but it looks like some shuffling of dates and schools could happen.

"We had to reschedule the Miami visit. Xavier is still set," he said. "But Boise I don't know. I might change that one."

He and the coaches are discussing setting up a visit to Fayetteville soon.