State of the Hogs: Kevin Richardson worth more than a nickel 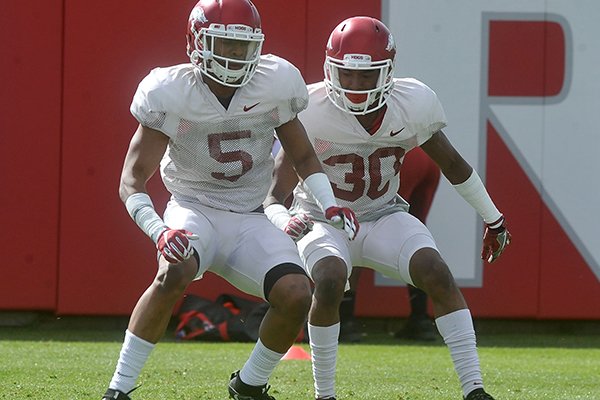 FAYETTEVILLE — The question came late in the interview, almost as an afterthought: Who is the backup nickel?

I just wanted the depth at the specialty position in the Arkansas defense. Paul Rhoads, the secondary coach and defensive coordinator, would give it to me. He doesn't hold back information as some of the more paranoid coaches often do.

There was a pause from Rhoads. Oh, no, he wasn't going to tell me.

It's because he couldn't.

“He's not here yet,” Rhoads said, grinning. “We don't really have a backup.”

That's why Rhoads had earlier emphasized that senior Kevin Richardson is such a valuable player in the new 3-4 defense being installed this spring. He's the only defensive back on the roster who fits the need, a corner/safety type with a great ability as a tackler and a knowledge of the inner workings of the scheme.

It's perhaps the big reason the Hogs struggled on defense last season. They were stretched too thin at cornerback and really didn't have the perfect nickel anyway.

“We had three guys to play three positions,” Rhoads said. “They wore down.”

Richardson was slated to be the jack of all trades in the secondary, someone who could play corner, safety or nickel, perhaps as well as anyone on the team. That went up in smoke during the season opener when the former walk-on from Jacksonville tore a pectoral muscle. Surgery knocked him out for the season.

At that point, Henre' Toliver was rotating with Richardson as the nickel in Robb Smith's defense. More of a cover man than a safety with great tackling skills, Toliver struggled to do all of the things required of the nickel. And he clearly wore down.

The plan now is to leave Toliver at the field corner position, replacing the graduated Jared Collins. It's really where Toliver belongs, not at nickel.

“He's really not a nickel,” Rhoads said. “We like him better at corner. Yes, he could play there again, but we really want Kevin there. We really need him to stay healthy.”

Richardson's value to the team is huge, although he isn't huge by stature. He's listed at 6-0, 178 pounds, but he's been closer to 170 for most of his UA career, sometimes lighter. Carrying weight has been an issue.

But he doesn't play small. He's a ferocious player - intense and a solid tackler. He is a perfect man to play against spread teams that like to call runs into spaces. Richardson will be in the right place, have the right angle and get bigger men to the ground. He's the surest tackler on the team, something the Hogs missed last season.

“It can't be stated strongly enough that we really missed Kevin last year,” Rhoads said. “He's so smart and so well-versed in what we do. He was a guy in the back of the defense who could play his spot perfectly and get the guys on either side or him lined up.

“I really don't think people appreciate Kevin enough. We really missed him. I think now that we have him back, we realize even more what we were missing. He's got some special gifts."

He also some limitations because of his size, Rhoads said.

“Because of that pectoral surgery, there were things he couldn't do while he was rehabbing to gain more weight," Rhoads said. "So he's about the same as he was before.

What Richardson is ready for is a big scrimmage Saturday. It's the first time he will tackle anyone to the ground since the injury against Louisiana Tech in September. He's had some contact in the last two practices, but the Hogs will be taking backs to the ground for the first time this spring.

I asked a silly question: Does Rhoads think Richardson is nervous?

“I promise you he's not nervous,” Rhoads said. “He's full-go. Nervous? No, I don't think that's a conversation anyone is going to need to have with Kevin on Saturday.”

“It sure was last year,” Rhoads said. “I was looking at the breakdowns of our games a few weeks ago and I had that number. I believe we played nickel 87 percent of the snaps for the season.

“The idea of the 3-4 and what we are doing with our outside linebackers may enable us to play more base against teams using three wide receivers. But I think we'll still be in a lot of nickel. Sometimes, you can't play base, even with faster linebackers. Some teams put four wide and you will have to match them as far as DB personnel.

“But even if it's not in nickel, I think you'll see Kevin out there. He brings such a relentless effort that it's contagious. It's that strain that we are looking for from everyone. It's what we talk about getting to across the board. He's there. He plays so hard and with such a great strain.”

That's hard to get from young players, although that's what Rhoads thinks will be the backup nickel in the fall. The 2017 recruiting class is full of candidates to play corner and nickel.

“We think there may be a couple in that group who can help at nickel,” Rhoads said. “But what we really need is for Kevin Richardson to stay healthy.”

Most will tell you that quarterback Austin Allen might be the team's most valuable player. Center Frank Ragnow, a possible first-round NFL draft pick, might be a close second. I think it's obvious Paul Rhoads might list Kevin Richardson as his MVP.

In a time when SEC West teams are spending millions, it might not seem appropriate to describe what Kevin Richardson is worth to the Razorbacks as only a nickel.

He's the only nickel.