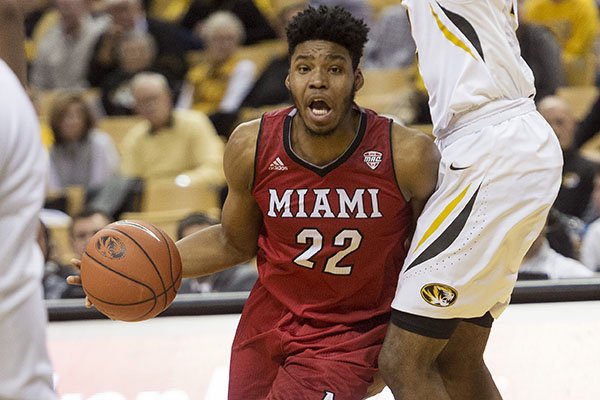 "I think it went good overall," Weathers said. "I felt a good personal touch with the coaches and coaching staff. I feel like they're someone I can rely on and depend on if I do come to Arkansas, which is important to me because I know I'll be a little ways from home."

He'll have to sit out a season before being eligible to play.

He was the all-time leading scorer at Shawnee Mission North High School in Kansas before signing with the Redhawks. He likes that Fayetteville is about three hours away from home vs. the nine hours to Miami (Ohio).

"It means I can go home when the team is on the road," he said. "If I go home for the weekend, I can be with my family."

Weathers plans to officially visit Nevada on Friday, the University of Arkansas, Fayetteville on Monday, Xavier on April 20, Oklahoma State on April 25 and Miami (Fla.) on April 30.

He was attracted by Anderson's message about the Razorback program.

"I really love how Coach Anderson really illustrated that they play hard, play tough and play with character," Weathers said. "That's a huge thing because coming from an environment where the team didn't do so well and care about losing, but at Arkansas you have a winning culture and winning environment. That's what I would like to do."

"He's someone that's been with Coach Anderson and someone who knows the ropes," Weathers said.

The Hogs played this past season without a true point guard, and Weathers could fill that role.

"They said I could be an immediate impact and benefit from sitting out a year and be ready for the next year," he said.

The visit with Anderson and Cleveland helped Arkansas.

"I think the three teams sticking out the most right now are Xavier, Arkansas and Oklahoma State," Weathers said.

Weathers sees the Razorbacks' uptempo style of play as a good fit.

"Yeah, that's something I like to do, get up and down and create plays for everyone and make my team better around me," Weathers said.

His decision is about a month away.

"I either plan on making a decision in early May or the middle of May," he said.

Jackson, 6-1, 160 pounds, recorded 64 receptions for 911 yards and 10 touchdowns last season. It was Bentonville West's first season with a football team, and the Wolverines lost in the first round of the Class 7A playoffs.

He received his first scholarship offer from Tulsa on April 1.

He's thankful for the offer from the Razorbacks, but he's still learning about the program after moving to Northwest Arkansas in 2015 from Philadelphia.

"I really don't know a lot about Arkansas because I just like moved here, but from what I've seen they're a pretty good school and pretty good team," Jackson said. "They have great coaches. They're super friendly."

Jackson, who recently recorded 10.74 seconds in the 100 meters, has attended multiple Arkansas games, but he grew up an Ohio State fan.

He said Bielema and receivers coach Michael Smith made him feel at home.

"They're amazing coaches," he said. "That's one thing I can say. They made me feel very welcome."

His mother accompanied him on the visit and was grateful for the offer.

"She was kind of surprised," Jackson said. "She's just happy that I have a chance to be recruited early."