State of the Hogs: Ramsey sees tight ends in waves 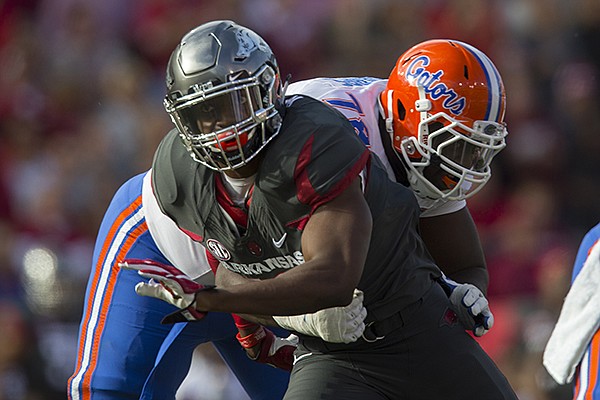 Arkansas linebacker Randy Ramsey rushes the passer during a game against Florida on Saturday, Nov. 5, 2016, in Fayetteville.

“I don't think so,” Ramsey said after practice Tuesday. “I am seeing those guys at my position -- that's who I play against -- and they just keep coming at you.”

That's the secret of the offense and one of the reasons Arkansas coach Bret Bielema seems to sign two to three tight ends in every class. Ramsey is playing the Razor position, the new outside linebacker on the strong side of the 3-4 defense being installed by coordinator Paul Rhoads.

“That means I go to the tight end side,” Ramsey said.

That really could mean either side the way Arkansas flips it's tight ends, H-backs and wing backs. The wing backs are often tight ends, too.

“It doesn't matter whether it's Austin Cantrell, C.J. O'Grady, Jack Kraus, Will Gragg or Jamario Bell,” Ramsey said. “They are all good. They all do a little something good. Austin is the best of the blockers. C.J. Can really run routes. Those other guys are good, too. I don't want to leave out Kraus. He's really good.”

Kraus appreciates that. He's been the one a lot of folks forget about. He came back from ACL knee surgery in short order last season. He had surgery during practices for the Liberty Bowl and was playing by the time SEC play rolled around last year.

O'Grady has been making a big move this spring, too. He turned heads in the first two scrimmages with his quickness in and out of routes. And, he's finally shored up his blocking, the weakest part of his game when he arrived from Fayetteville High.

“I just had to listen to Coach Bielema, Coach (Barry) Lunney and Coach (Ben) Herbert,” O'Grady said. “I think I had the offense down last fall and started to get some plays. Then, I got my weight and nutrition right. I changed my body by eating the right things.

“It doesn't just happen all at once. I was 235 when I got here and I got up to 256 to 257, but now it's a good weight. That's from eating the right stuff. That's helped my blocking. I'm starting to get some confidence.”

Lunney, the tight ends coach, sees O'Grady emerging as the spring progresses. He saw it coming over the winter.

"We give our guys written tests over the winter as far as the playbook," Lunney said. "C.J. had the highest grades a lot of the time, so he knows it. And, you see that this spring. He's shown us that he can do it."

Ramsey has turned heads, too. He is the player in the front seven who may fit the best in the new 3-4.

“He's playing the same spot basically, the same as what the Sam linebacker or strong side was in the 4-3 in our base,” Rhoads said. “The thing now, we aren't going to take him off the field when we sub to our sub packages.”

Ramsey said, “I just flip sides when we go nickel or cash. So I stay on the field. I can rush or I can drop. I have cover skills. I was once a cornerback in high school, so I have that in me.”

Ramsey is full fledged outside linebacker now. He's a speed rush guy. He knows who to study at the next level, another 3-4 specialist.

"I really like the 3-4 because I model my game after Von Miller," he said. "That's the defense he plays in the NFL. I think it is going to allow me to make a lot of plays."

Kraus said he feels a little sorry for Ramsey in that he doesn't leave the field.

“We roll our tight ends and he stays out there,” Kraus said. “So we've got the fresh legs, but that's what we do with our offense and the tight ends.”

There's really more than the group that Ramsey mentioned. Junior college star Jeremy Patton, rated tops at the position, will arrive in the summer. Grayson Gunter is out this spring with shoulder surgery, but he'll be back to play there in August. He played as a true freshman last fall. Gunter is running routs in passing drills, but out of contact.

There is another one added to the mix this spring. Hayden Johnson can also play some H-back or tight end after playing at fullback as a true freshman. He worked at both fullback and tight end this week as the Hogs mixed in some goal line work.

“That's a deep position,” Ramsey said. “It's a challenge for us every day in practice when they are rotating and we aren't on defense. Coach Rhoads said the Razor and the Hog positions have to be flexible enough to play both sides because our tight ends can change the strong side in a second. So if you know them both, they can't put you in a bad spot.”

"That's good insight from Randy," Lunney said. "That would be the goal, rotate guys and keep bringing in someone with maybe a different skill set."

Each player brings a little something different.

"That is the way we are, that some are better route runners, some better at pass blocking, or maybe someone is better at run blocking," Lunney said. "What we want to get to is that more have two or three skills and we aren't predictable. We are getting closer to that."

As far as the defense, Ramsey likes the flexibility of playing both spots. He said it helps in disguising the blitz, something that didn't happen so much the last two years in the 4-3. Of course, he was coming off the field when the Hogs were not in base much of the time.

“I don't think that will be happening so much now,” he said. “I am having fun. I love the defense. I love the style. We are attacking more and I think that's my strength. I think I'm good in space, but I love to blitz.”

Ramsey was once the odd man out for more than scheme reasons. He was not in the playbook and lost his academic eligibility for school book problems, too.

“I'm a different person now,” he said. “I think I'm a lot more mature. To be honest, I feel like a veteran now. I feel like I've been here awhile and understand what's going on.”

The big thing Randy Ramsey understands, the Arkansas offense is not going to run out of tight ends any time soon. Players may come and go – and a lot of them to the next level – but the Razorbacks will always have tight ends.