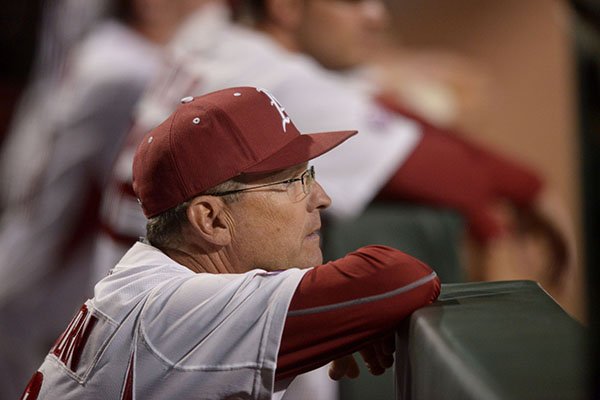 KANSAS CITY, Mo. -- Arkansas Razorbacks Coach Dave Van Horn's first memory of attending Kansas City Royals games was at Municipal Stadium, where the Royals played from 1969 through 1972 after joining the American League as an expansion team.

Van Horn, who was born in Fullerton, Calif., but grew up in the Kansas City area in Grandview, Mo., continued to attend games when Royals Stadium opened in 1973.

"I went out there with my friends in high school a lot," he said. "You could get in the left or right field stands back then for $3 I think. I know it was cheap and those were the tickets we could afford.

"We'd get there as early as we could and try to be first in line for the general admission tickets. Then we could sprint in there when they opened the gate and get those front row seats.

"We'd hang over the outfield wall. That was kind of cool.

"I remember one night watching George Brett steal home in the bottom of the 10th inning to win the game. I've got a lot of good memories there."

Van Horn won't have to sprint into the Royals' home ballpark -- known as Kauffman Stadium since 1993 -- for a nice view of today's game.

It will be the first time Van Horn, 56, has coached a game in Kansas City in his 29 seasons as a college head coach. Having it happen in Kauffman Stadium adds to the experience.

"I'm still a big Royals fan," he said. "So it's neat to coach a game there. But the experience probably will be really more for the players to be honest with you."

It will be the second time in two seasons the University of Arkansas, Fayetteville is playing in a Major League stadium. The Razorbacks went 3-0 at Minute Maid Park --the Houston Astros' home -- in a 2016 tournament.

"We've had some neat places to play and our guys are gung-ho for it," Van Horn said. "When they chose to come here, these are the things they want to do.

"Playing in Kansas City will be a great experience for the players. When we pull up in the bus and walk in the stadium and hit the field, they're going to think, 'Wow, this is awesome. This is what we're trying to get to down the road.'

"Right now for some of these kids it's a dream of theirs to play in the big leagues and hopefully playing in Kauffman Stadium will help motivate them a little bit more."

The Arkansas-Kansas State game was arranged through the College Baseball Hall of Fame and Dick Howser Award, which recognizes the nation's top college player and was won by Razorbacks outfielder Andrew Benintendi in 2015.

Jana Howser -- daughter of the late Royals Manager Dick Howser -- asked Van Horn if Arkansas would be interested in playing at Kauffman Stadium.

"I said, 'That'd be great. Let me know when you want to do it,' " Van Horn said. "She gave a couple dates and we found one where we could play.

"At the time we didn't even know who we were going to play. We just agreed to play whoever they got for us."

Kansas State is 4-11 in the Big 12, but the Wildcats won two of three games against West Virginia last weekend to knock the Mountaineers out of the No. 25 spot in the USA Today coaches' poll.

Kansas State also has victories over No. 10 Texas Tech and Oklahoma State.

"We've heard Kansas State is good and their record in Big 12 play really doesn't tell you how good they are because they've been in almost every game," Van Horn said.

The Razorbacks are looking to bounce back from losing two of three games at Auburn, which dropped them to 12-6 in the SEC. Arkansas resumes conference play against Ole Miss Thursday night at Baum Stadium.

"I just want to get through this game and keep everybody healthy and get to Ole Miss," Van Horn said. "It's that time of the year."

Van Horn said some family and friends who still live in the Kansas City area will attend tonight's game.

His favorite Royals player growing up was Brett.

"Brett was a young guy and he was having a lot of success, plus he played third base and that's where I played in high school," Van Horn said. "So I took a liking to him like millions of other people in Kansas City."