State of the Hogs: On April 28, Burlsworth on my mind 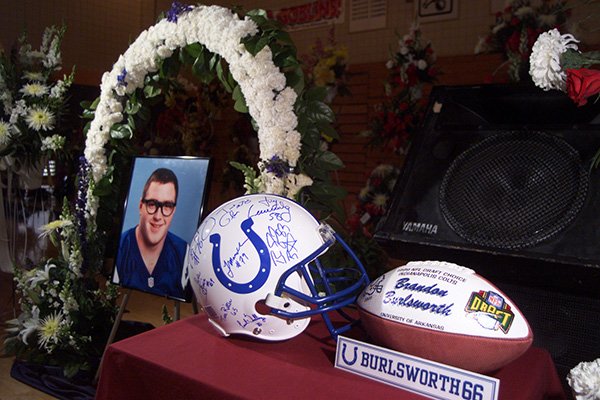 A commemorative display was set up by the Indianapolis Colts at the funeral of Brandon Burlsworth in Harrison on Saturday, May 1, 1999.

FAYETTEVILLE — My father – and his brothers – always told me about the place they sat when the news hit about the bombing of Pearl Harbor.

There are several such events in my lifetime. I know the place I stood when I learned the news of John Kennedy's death. I can take you there.

There's one more spot that gives me chills. I won't go there ever again. It's where I was when I learned of Brandon Burlsworth's passing 18 years ago.

“I hear that a lot,” said Marty Burlsworth, Brandon's older brother. “So many people can tell you that. I understand.”

Marty Burlsworth agreed to take a phone call Friday on the 18th anniversary of his brother's death in a car accident near their hometown of Harrison. Brandon Burlsworth, who was drafted by the Indianapolis Colts 11 days earlier, was on his way home from a workout in Fayetteville to attend his church with his mother.

“I know the day,” Marty Burlsworth said. “I know it's coming a few weeks in advance. I looked at the calendar a few weeks ago and realized that I was going to be at a non-profit conference, with the date falling square in the middle of it.

“You know it's coming and I don't always know exactly how to handle it. I was asked by someone with our foundation if we should acknowledge it earlier today via social media. No, it's not like a birthday.”

Sometimes there are tears. There was consternation about being away from Harrison on the date, something that's happened a few times.

“It's tough on Mom,” he said. “It can really be tough. She can have a very difficult time on this day. Do I call her and talk about it? No, I don't do that. I might call and just check, ask her what she's doing. She was supposed to go to an event at church today and I'm not sure she can.”

It's been a good year in the Burlsworth family. The release of Greater, the movie about Brandon's life, came last August. It's still playing.

“I think we got a message yesterday that it was playing in Israel and Switzerland,” Marty said. “And you can get it on-demand in several places.

“We don't really push merchandise, but the movie has done that. We have sold a lot of T-shirts, glasses and other items that help with the (Burlsworth) Foundation since the movie was released.”

The movie may show up soon on Netflix, too.

“I don't think it's going away,” Marty said. “I keep hearing from people who didn't know the story, from places far away from Arkansas.

“I guess my favorite was the call I got from a person who saw it in Texas. The place erupted into a standing ovation at the end – about a Razorback. I love it. Folks in Texas are usually not that fond of Razorbacks.”

There came a question this week about the possibility of another Burlsworth developing on the Arkansas team. Could there be a walk-on on the current roster turn out like Burlsworth?

OK, I can't go there, maybe ever. Yes, there could be, but I don't see one. It's not like a Johnny Gibson isn't good. The former walk-on right guard fighting for a starting position is plenty good.

But he's not a Burlsworth. He's not fast enough. He's not in the same category as far as athletic ability. He isn't likely to earn status as an All-American.

I say that knowing full well that Gibson has great feet, can run and is athletic. But he's not in the same category.

All you had to do was see Brandon in the open field, chasing a free safety for the third block on the play to know the special nature of his speed for a 310-pounder. I haven't seen Gibson or any other Arkansas linemen do that consistently.

Rockey Felker, UA offensive coordinator when Burlsworth broke into the lineup, told me in 1996 that Burlsworth was the best player on offense.

“When we need a play, it's always behind Brandon,” Felker said. “He's a sophomore, but he's our best player.

“We can always get at least 1 yard in his area and when you go back and look at our big plays, it's usually because Brandon got a piece of the nose tackle, got to the next level to pick off the linebacker, then released to chase the free safety. There goes the back with no one to touch him.”

Gibson has to change more than his speed. He's got to become obsessive compulsive about a lot of things, starting with the weight room. When he's the first in the weight room and the last out I'll start comparing him to Burlsworth.

“I still hear stories about that,” Marty said. “We were at our football camp not too many years ago and Chad Abernathy, one of Brandon's teammates, started talking about the weight room.

“Chad said there was a time when he was about done and there was Brandon beside him. Someone said the baseball team was coming in and they needed to leave. Brandon didn't leave. Chad worked a little while longer and got out of the way for the baseball team. Brandon just kept working.

“I used to deny that he was OCD, but he had that. He parked in the same spot in Lot 44, right at the top. He called home every night at 10 minutes after 10 every night.”

I thanked Marty for taking the call.

“I don't mind,” he said. “It's best for me to just play this day casual. I can lose it pretty quickly. So can Mom. We know what day it is, but it's better if I don't smother her and just roll through it.”