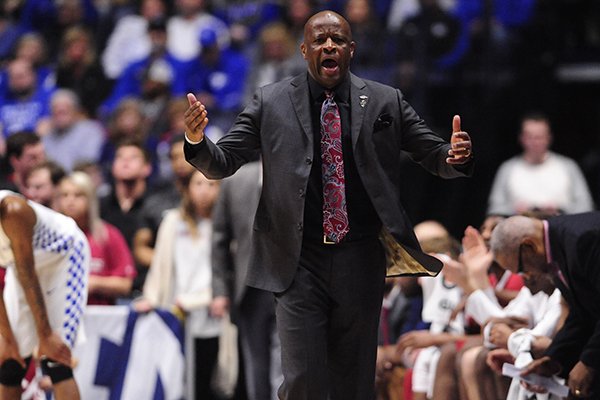 LAS VEGAS -- Three members of the 17-under Arkansas Hawks, all committed to the University of Arkansas, Fayetteville, are expected to sign with the Razorbacks in November, and a fourth is planning to enroll a year later.

But even as these four move into college, the 17-under Hawks will continue to be scouted by the Hogs and other colleges, with more talent flowing through the ranks.

Marion junior forward Tim Ceasers, 6-8½, 205 pounds, joined the 16-under Hawks for the last two summer evaluation periods, July 19-23 and July 26-30, and was a major reason the Hawks made the Sweet 16 of the Adidas Summer Championships on Saturday.

"It's amazing," Ceasers said. "It feels good because you have to go out and play your hardest and maybe get an offer from one of them."

Ceasers is drawing interest from Arkansas, Kansas State, Georgia Tech, Baylor and others. But if the Hogs extend a scholarship offer, he plans to commit.

"Got to stay home man," Ceasers said. "I'm just a kid from Marion that wants to stay home."

Ceasers said his hometown would embrace him going to Arkansas.

"It would mean a lot because I would be the first one to go to like a major DI school," Ceasers said.

Ceasers said he has been told by doctors that he is still growing.

"I like to try and get to the basket," Flanigan said. "I can shoot the three and midrange and play defense."

Flanigan, who has gained 8 inches in height in a span of two years, said he hasn't had trouble adjusting to his growth spurt.

"I've been in the weight room a lot trying to get bigger, stronger, faster," Flanigan said.

Hawks Chairman Bill Ingram has a simple reply when college coaches ask if him if Flanigan, the son of UALR Coach Wes Flanigan, is a lock to play for his father.

"This is the easiest role I've had in recruiting," Ingram said. "When they call me about him and they ask the questions, I listen to the question and I say talk to his dad."

"They always laugh and joke about it, 'You going to your dad's school?' " Flanigan said. "I just tell them my game will decide that."

Baptist Prep junior guard Isaac McBride, 6-1, 185, has interest from Oklahoma, Arkansas State, Ole Miss, Missouri, Wichita State and others. He has a scholarship offer from UALR.

McBride joined the Hawks for the 3 Stripes Alliance tournament on July 20-23 in St. Charles, Mo. McBride said Ingram urged him to focus on his on-ball defense and toughness.

"Coach Ingram has been pushing me," McBride said. "He's been challenging me since St. Louis. I was terrible defensively and then I kept progressing and kept progressing, and now I'm just trying to be able to guard fast, quick guards and long guards, so when I get to DI I'm not surprised."

McBride, who reports a 3.5 grade point average as a sophomore, said he plans to major in communications so he can go into broadcasting and talk about future players.

"I want to be able to talk about the players that are able to do what I used to do," he said.