Coach wants to see more out of Martin 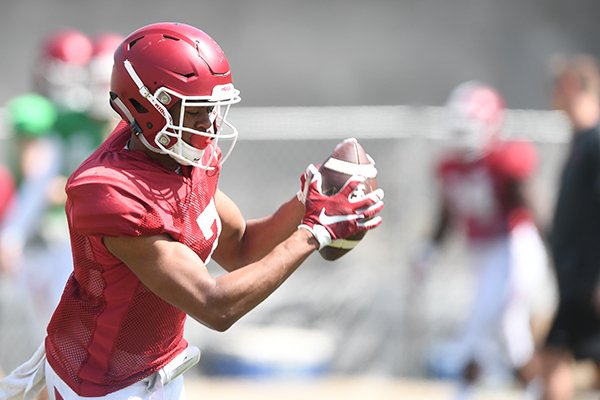 FAYETTEVILLE — Of the three receivers who transferred to Arkansas from junior colleges this year, Brandon Martin who was the most coveted.

But it was Martin who received the most critical review from receivers coach Michael Smith on Tuesday. Smith said Martin hasn't progressed as much as expected through the first week of preseason practice.

"I don't think he's where he needs to be yet," Smith said. "This is only his 18th practice and I'm not making excuses for him, but I just have really high expectations for him.

"I'd like to see him be in better shape. I had a concern with his weight over the summer, but he's working on that, trying to get that down. Also, I want him to know the playbook. He had a whole summer and I don't feel he's where he needs to be."

Martin signed with LSU out of high school, but wound up at Mississippi Gulf Coast Community College because of academic issues.

ESPN rated him the No. 1 receiver in JUCO last season. He signed with Arkansas last December and went through spring practices with the Razorbacks.

Smith was quick to point out Martin is "doing the right things necessary" to be where coaches want him by the start of the season. He dismissed the notion Martin was undisciplined, as some JUCO players have been depicted in the popular Netflix documentary series Last Chance U.

"I try not to recruit guys who don't fit the room and I've been blessed with (JUCO) guys we've brought in," Smith said. "They're not bad kids; they're kids who are willing to work and willing to listen. Shoot, I (played and coached) at K-State where we lived off junior college.

"I think a lot of those kids get a bad rap because they went to JUCO, but you've just got to get the right kid, whether it's JUCO or high school."

Martin's former Mississippi Gulf Coast teammate, Jonathan Nance, drew the highest praise from Smith on Tuesday. Nance, who went through spring practice with Martin, figures to factor into the Razorbacks' six-man rotation at the position.

"He's been lights out," Smith said. "I mean, he's played very, very well. You can tell he had a really good summer and learned the playbook. He's doing some really good things.

"I think he's playing really fast because he knows where he's going. He came back off the little knee injury he had in the spring and got himself into shape. He looks good."

"To be able to bounce around, that's an asset for him as a wide receiver," Smith said. "The more you know, the more you'll be able to play."