JUCO transfer Gabe Richardson next up at OLB 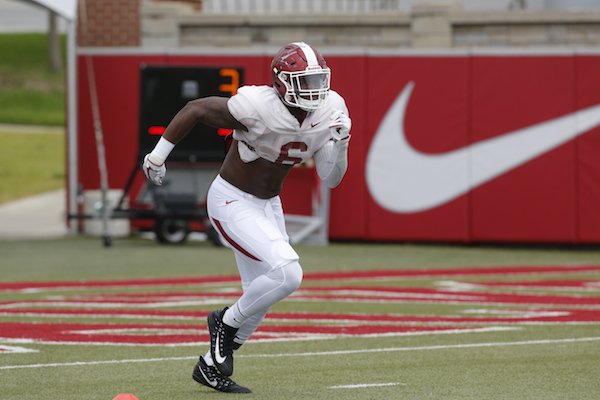 Gabe Richardson runs through a drill during Arkansas Razorback football practice Tuesday, Aug. 1, 2017, on the campus in Fayetteville.

FAYETTEVILLE — Arkansas’ position coaches took their players out to eat at a different local restaurant in a team bonding initiative Tuesday night.

Assistant Chad Walker and his outside linebackers hit up Shoguns in Fayetteville, huddling around one of the Japanese restaurant’s tables and dining on sushi and steak.

I bought a real expensive meal,” junior college transfer Gabe Richardson said. “ know (Walker) was actually watching exactly what we were eating, but I said, "Coach, I'm going to chow down today." We gonna eat on the field, we gonna have to eat in Shoguns, too.”

Richardson can be forgiven for wanting to indulge a bit. There were no trips to fancy restaurants during the two years he spent at Hutchinson Community College in Kansas.

“You'd be eating the burger somebody else didn't eat two days later and you wouldn't even know,” Richardson said.


Richardson wants to take advantage of opportunities at Arkansas, whether it be at Shogun's or on the football field in the 3-4, the same system he ran at Hutchinson.

Richardson was a disruptive presence last year, leading his team with 18.5 tackles-for-loss and 6 sacks last year. The sophomore wants to make an impact this year and doesn’t plan on waiting around to do it.

His first media session made it evident he doesn’t lack for confidence despite having just arrived on campus at the beginning of the summer.

Richardson is better positioned to make an early impact now than he was when fall camp begin, albeit in part because of the broken foot suffered by Jamario Bell, who’d been working with the second-team defense behind Karl Roesler at the Hog position, the heftier of the two outside linebacker slots.

With Bell out and Roesler somewhat limited early in camp, Randy Ramsey, the starter at Razor, has worked both spots. But Richardson is working with the second-team defense at Hog as well as playing a situational role as a pass-rushing end. Standing 6-foot-3 and weighing in at 239 pounds, Richardson possesses the prototypical frame and quickness the staff looked for when deciding to transition to the 3-4 after a woeful 2016 season.

One aspect of his game has stood out to teammates early in camp.

Those were the first words out of both players’ mouths when asked about their early impressions of Richardson.

Richardson got in extra work with the developmental group after the main portion of practice ended Wednesday, an effort by the staff to get him reps and put him in a position to be able to make an impact in year one in Fayetteville.

He hasn’t been on campus long, but he knows all about the issues that plagued the unit a year ago and prompted the staff to shift to the 3-4 and prioritize athletes like himself.

“Auburn ran for 500 on us…,” Richardson said before trailing off into a deep sigh as he shook his head.

He plans to be part of the fix.