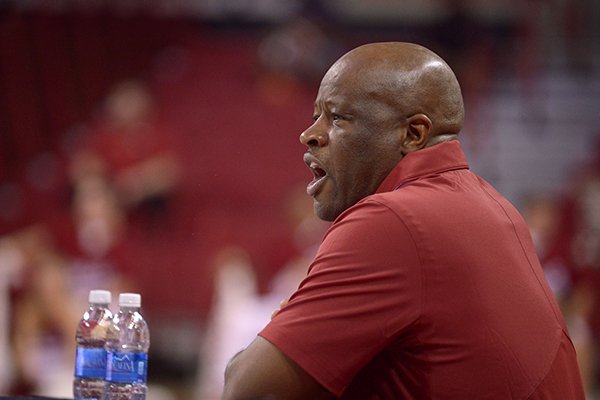 Arkansas basketball coach Mike Anderson watches from the sideline during a scrimmage Sunday, Oct. 23, 2016, in Fayetteville.

Arkansas will host two of its top basketball recruiting targets on official visits before the end of the month.

They are friends and have talked about playing at the same school.

"We were already close before, but have become even closer since we have been talking about going to Arkansas together," LeBlanc said. "If that is what it would end up being, then that would be pretty nice. I am not going to lie to you about that.

"We are friends from the circuit and playing each other," Embery said. "It would be really cool to end up on the same team with him. We'll just see how it goes."

"It's Arkansas, Georgetown, LSU and Texas A&M," LeBlanc said. "I plan to commit on my birthday Nov. 12th."

LeBlanc will begin his official visits this weekend with a trip to Georgetown, now coached by former Hoyas and NBA star Patrick Ewing.

"I don't really know how Coach Pat is going to coach, how his offense is going to be, but I know he is a legend," LeBlanc said.

Arkansas was one of the earliest to offer LeBlanc, with assistant coach and fellow Louisiana native Scotty Thurman as his chief recruiter.

"I like the way they play and me and Coach Thurman have a great relationship," LeBlanc said. "I think the Arkansas coaches are all really good people and I like talking to them. They ask me more than about basketball. They ask about my life, what I like doing, what are my favorite hobbies and things like that."

"My high school team has won the last three years," LeBlanc said. "We also have a pretty good team back this year and expect to win it again."

He also had a good AAU season this spring and summer after missing the 2016 circuit schedule because of an injury.

"As a team, we wanted to go further, but this was my best summer I have ever had," LeBlanc said. "I didn't get to play last summer because I broke my foot so I was limited."

LeBlanc is an athletic forward who seems to fit the mold of the players that Arkansas head coach Mike Anderson wants.

"The best parts of my game right now are my defense and my motor," LeBlanc said. "I am still working on my offensive skill set.

"I go by a motto that if you don't work, you don't eat. So I try to outwork everybody, no matter how good they are or a size advantage they have on me."

Embery has visits set for Arkansas on Aug. 25, Butler on Sept. 9, West Virginia on Sept. 15 and Texas A&M on Sept. 29 and is in the process of finalizing a trip to Arizona State.

"I have had a lot of great schools recruiting me," Embery said. "I feel very honored."

He feels good about his development over the summer.

"I think I improved just being consistent every game and I just want to continue to improve my ball-handling because you can always get better," Embery said. "I think that would be good examples of things I can do to be a better PG."