State of the Hogs: What to watch in open scrimmage Saturday 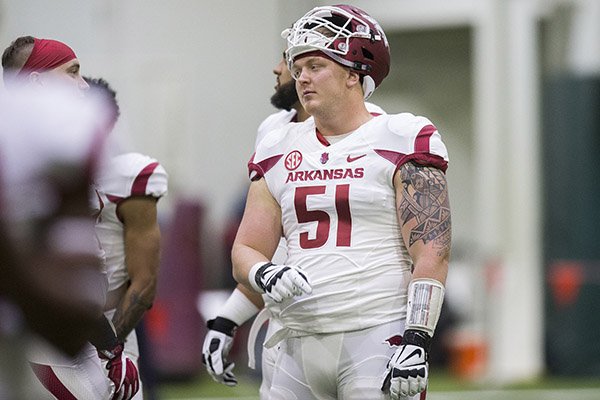 FAYETTEVILLE — There's an old adage in coaching that you get what's emphasized. Without question, Arkansas emphasized improving its pass protection during the spring and summer.

Through the first two weeks of preseason camp, the pass protection has taken a big jump forward. That was obvious in last week's scrimmage. It's something to watch in a Saturday scrimmage, which will be open to fans from 1 to 2 p.m. at Razorback Stadium, weather permitting.

“I think that's the piece that we've worked on the most in the last few days,” Anderson said. “There have been days where we've seen that come through in a big way, too. Our pad level is much better. We've really had some good days in inside run periods. Everyone knows, get the pads down.”

One of the movers and shakers in this improvement is left guard Hjalte Froholdt. It was the run blocking that Froholdt mastered first. The junior from Denmark has shown a big jump in pass protection, but his run blocking hasn't slacked.

“I can tell you that he's a joy to coach. He takes pride. You can tell by the look in his eyes that he takes everything seriously. He's put his heart and soul into this.”

Told that Froholdt wasn't always the toast of the fans last season when mistakes were costing sacks or hits on quarterback Austin Allen, Anderson nodded his head.

“I know that,” he said. “But if you watched him closely, he did some really good things, too. I think fans who felt that way last year are going to be pleased when they see Hjalte this year. Those that were down on him will see a different player.”

There are others who played on offense last year that might be totally different this season. Third-year sophomore Deon Stewart, one of the starting wideouts, has made a big move.

“I wouldn't say it was just in our preseason camp,” said Michael Smith, wide receivers coach. “Deon made a move last season, in the bowl preparation and again in spring drills. He's just kept coming.

“Deon has been impressive for quite a bit of time. I'm impressed. He's continued with that, too.

“I think he knew the offense last year, but he's become a student of the game. I think he's typical in that there is going to be continued growth in players.

“Sometimes we see young players before they are ready. They have to play and sometimes we don't, but there has been growth in all of them."

Smith said fans didn't get to see Allen growing because he did so in practice while his older brother was the starter.

“The first time we really saw him was as a fourth-year junior," Smith said. "We are seeing some of these wide receivers along time before that and there is going to be growth as we move forward with them.

“Some of them are further along than others, but all of them are still growing. I just have to push them and get them there. It's different for each one."

Smith said Stewart has progressed "at a rapid pace, but there are others you haven't seen much like La'Michael Pettway making big improvements, big growth.

“I'm seeing big growth in some of the new ones, like Gary Cross from junior college. True freshmen Jarrod Barnes and Koilan Jackson are making big pushes, daily improvement."

Barnes, a former option quarterback and standout defender on the basketball court at Cabot, is a great athlete.

“He's got great hips, great hips and a dominant athlete," Smith said. "He's learning the nuances of being in space. He played quarterback. He knows how to play with the ball in his hand, but not as much in space. But he's smart and he's learning it."

Like Barnes, Jackson made a position move from quarterback to receiver, but did so as a high school senior last season at Joe T. Robinson in Little Rock.

“Koilan got a chance to play in space last year," Smith said. "The good thing for both of these guys, they understand offense. You learn more when you played quarterback. So the transition comes quicker. Koilan has put himself in position to play. He's had a great camp.

“We are getting better at wideout. Competition makes us better.”

Arkansas coach Bret Bielema challenged some of the veterans before the start of camp, noting there were new faces in the wide receiver room who had advanced over the summer. Clearly, he was talking about Barnes and Jackson. Smith heard the message as much as the veteran receivers.

“I felt like he was calling out some guys and he was calling out the coach, me, and rightfully so” Smith said. “They accepted the challenge and I accepted the challenge. I am happy to see what's happened. Those guys have stepped up. I've been impressed with LaMichael Pettway. He might make one mistake a day, but he continues to work. I love his approach.

“I see guys like LaMichael and Deon growing up, and I see young guys right behind them, chasing them and competing. It's a good situation.”

On the defense, linebackers coach Vernon Hargreaves is excited to see Dre Greenlaw scrimmage. The junior from Fayetteville hasn't been in live contact since the Belk Bowl last December when he broke his foot for the second time in less than three months.

"He hasn't been live in our 3-4 work," Hargreaves said. "But we've been in some stuff that he's had contact, just not a scrimmage. He's looked good.

"I think what Dre's seen in our 3-4 package is that he's uncovered. He doesn't have a blocker head up on him. He's got a chance to be free, run and make more plays. It's perfect for him. I think it gives himself more of a chance to show off his game. He has looked good in it. Now maybe he can get in a scrimmage."