T.J. Hammonds on track to play in opener 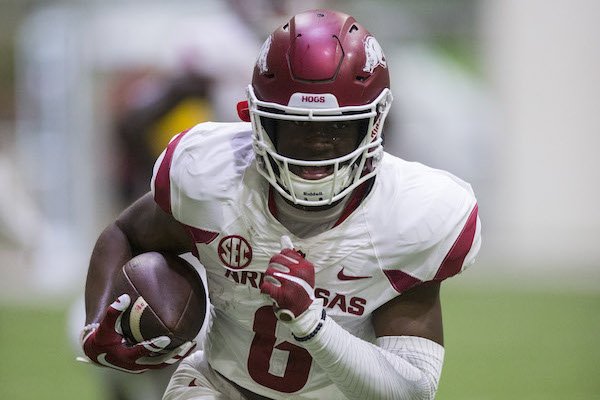 T.J. Hammonds runs after a catch during Arkansas' football practice on Saturday, April 29, 2017, inside Walker Pavilion in Fayetteville.

FAYETTEVILLE — T.J. Hammonds returned to practice Tuesday and should be fully cleared from the knee injury that forced him to miss most of training camp by Thursday if he doesn't have any setbacks.

Arkansas’ sophomore receiver was a starter before going down with an injury early in camp similar to the torn meniscus he suffered during fall practice a year ago. He returned to practice Tuesday. The Razorbacks open the season Aug. 31 against Florida A&M in Little Rock.

“T.J. Hammonds was running around looking great yesterday,” coach Bret Bielema said Wednesday at the Northwest Arkansas Touchdown Club. “I think he’ll be full-go by the end of the week.”

The 5-foot-10, 195-pound Little Rock native is one of the more versatile, explosive players on the roster. He played running back a year ago, worked at receiver during spring practice and got work at both positions during fall camp as the coaching staff indicated their plans to line him up all over the field.

The outlook is murkier for senior receiver Jared Cornelius, who has been sidelined most of the month with a lingering back injury that resulted in the coaching staff taking him off the 105-man roster during camp.

He was eligible to begin practicing with the team again Monday with the start of school and has caught passes while mentoring younger receivers, but hasn't been fully cleared by the medical staff. He could be cleared in the next week, Bielema said while addressing the crowd, but it isn't a given he'll play in the opener.

"If it is, it is," Bielema said when asked if he thought Cornelius would be ready to go for Florida A&M. "If it's TCU (it's then), if not we've got a bye week after that. We'll get him when you're there."