Accolades not part of job description 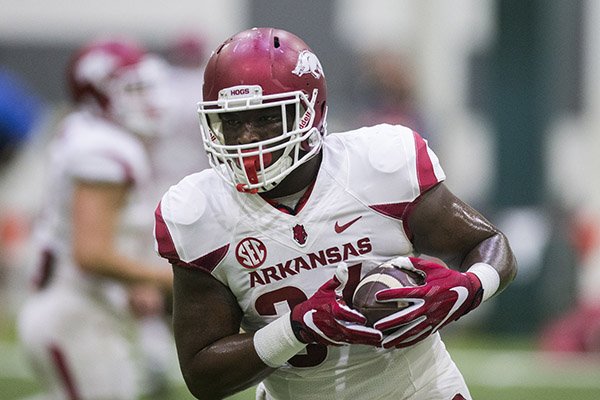 FAYETTEVILLE -- Many football players talk about doing "whatever the team needs."

Nobody on the Arkansas Razorbacks' roster has lived by those words more than fullback Kendrick Jackson. The soft-spoken junior from tiny Haynesville, La., was a rookie linebacker during the training camp of 2015 and was destined for a redshirt season when he saw an area of need at the unheralded fullback spot.

Analysis Much like the offensive line, the blocking of the fullbacks was up and down in 2016. The coaches expect a big jump this year in physicality and execution of the blocking scheme in the run game and also in pass protections. Johnson had an 18-yard catch on an early TD drive at TCU then a 7-yard grab at Missouri. Jackson is still waiting on his first career “touch” out of the backfield.

"He saw that he was going to be sitting on the bench and asked to play fullback," University of Arkansas, Fayetteville Coach Bret Bielema said. "I let him do that, and he's really grown."

Jackson, a 6-0, 253-pounder, played in 11 games in 2015 with one start. After a brief look at linebacker again in the spring of 2016, he went back to fullback and has found a home. He and true freshman Hayden Johnson split time at fullback last season, with Jackson logging two starts and Johnson getting seven.

Bielema asked for more out of the fullbacks this spring.

"In the spring, coach stressed that we need to make a big jump at the fullback position, and I feel like we're doing that to the best of our ability," Jackson said. "I buckled down and looked through the playbook."

Offensive coordinator Dan Enos liked what he saw from Jackson during camp.

"Kendrick is really, really improved," Enos said. "He's playing fast. He's playing with power. He's playing smart. There's not a lot of glamour, kind of like adding another offensive lineman ... at fullback in our system. But he's catching the ball very well out of the backfield when we use him, and he's getting his hat on the right guys, and he's straining and being physical."

Talk about no glory. Johnson logged two receptions last season. Jackson has no carries or catches in his 24 games at the position, which exists in Arkansas' power running game mostly to free up the tailbacks at the point of attack.

"They're glorified offensive linemen, and they know that," Mitchell said. "Every now and again coach Enos will throw him a bone and throw the ball out there to them. But they understand their role and they embrace it."

Mitchell talked up the traits of the top fullbacks.

"Kendrick was a high school quarterback, played basketball," Mitchell said. "And they're both tremendous athletes. Kendrick probably has some of the better hands out of the backfield that we have. He's a thick guy, powerful, he can roll his hips and he's athletic. You can get both of those, catching the ball out of the backfield and being a physical blocker."

Senior center Frank Ragnow said he's got a load of respect for Jackson and Johnson.

"In both the run game and the pass game they're crucial. There are plays where we leave a guy open because we know that they're taking him. They need to make that block. Then there are plays where they play cleanup and help out on the support, so they're definitely crucial for us."

Bielema said early in camp Jackson has a chance to be "very special" despite being one of the lightest talkers on the team.

"I love the kid to death," Bielema said. "Now, he won't say boo. You guys can all go ask him and he ain't gonna talk to you very much, but he does speak with his pads. Our kids really, really like him, and I think he could be on the verge of something special.

"And then Hayden Johnson behind him is kind of a dual threat for us at fullback and tight end and is doing a really nice job."

"To Hayden's defense, last year we played him as a freshman, and to start at fullback in the SEC is tough because you're going against some of the better linebackers in the country and he probably got beat up along the way," Mitchell said. "This fall he's been a lot more physical than he was last fall. I'm looking forward to seeing him in games."