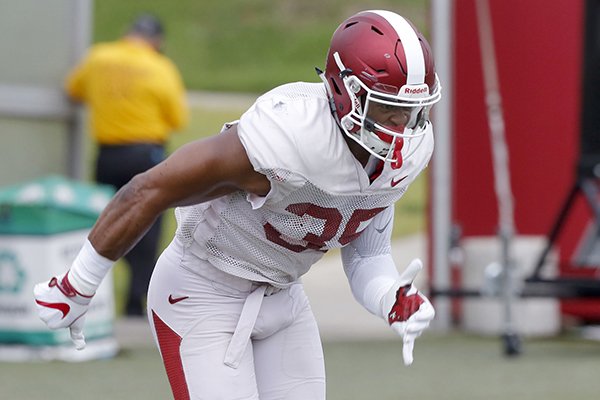 FAYETTEVILLE -- They say you can be too smart for your own good.

Not in the too-big-for-your-britches kinda way.

The price Eugene paid -- for being a quick learner who turned versatility into an asset -- is he never really got plugged in anywhere because he could fit everywhere.

Arkansas Coach Bret Bielema notes that Eugene takes notes on every word at every meeting.

"His papa taught him that you can learn something from everyone," Bielema said. "So he takes notes. We have a public speaker and he'll take notes. He actually spoke to the team about taking notes."

Eugene didn't redshirt as a University of Arkansas, Fayetteville true freshman in 2014 because he quickly showed the ability to play all three linebacker spots in the 4-3 scheme Arkansas utilized through 2016.

But now he's inked in as the starting Hog 'backer for Arkansas' Thursday night season opener against Florida A&M at War Memorial Stadium in Little Rock.

It was a "conscientious" decision situating Eugene in one spot, Bielema said, because Eugene had been shortchanged by his versatility.

Over time, Eugene has been matched up over the tight end while Randy Ramsey, also an ex-high school safety, plays Razor.

"Dwayne's had a great fall camp," Bielema said. "That's why we stayed with it. Him and Randy are by far our two best outside 'backers."

Rhoads, the secondary coach who became defensive coordinator in January, relishes seeing Eugene capitalize on the opportunity to play where he is best suited.

"We never knew how good he could have been had he just stuck at one spot," Rhoads said. "But this new defense is giving him a great opportunity and he's taking advantage of it."