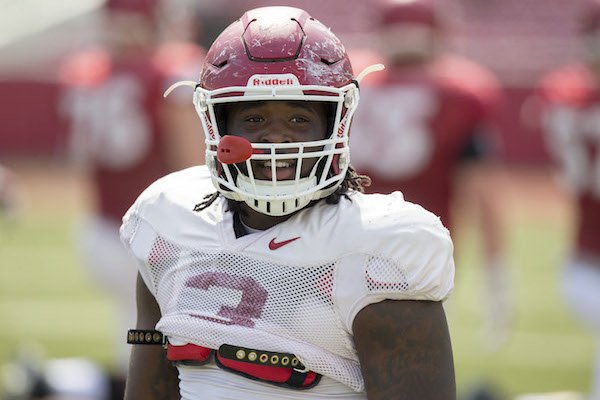 FAYETTEVILLE — McTelvin Agim can still hear the sound of his cell closing for the first time, six years after the fact.

The Arkansas defensive lineman was an eighth-grader in Texarkana, Texas, and had just started a weekend sentence in a juvenile detention center, the result of an arrest for running from the police.

His punishment — and the outcome — could have been so much worse, considering Agim had been trying to steal a car. Fate had other plans for the 14-year-old Agim, one of the top high school football recruits in the country two years ago and now a rising star as a sophomore. It's a rise that began in that jail cell.

A kid struggling to cope with the loss of his caretaker grandmother found a way to turn his weekend in juvy into a life-changing event.

"I really believe it's one of the best things to ever happened to me," Agim said. "I thank God that it happened to me then when I could change my life instead of later when it was too late."

By all accounts, Agim was a good kid. Good grades, committed to his grandmother, Charlie B. McGraw, and two sisters, everything that could be expected while growing up in an area where the Crips are listed as having documented gang activity by the state of Texas .

Despite having lost her eyesight and legs because of complications from diabetes, McGraw ran a disciplined household while Agim's mother, Deanna Giddens, was at work much of the time. Between a childhood that started in Dallas and saw several moves back and forth to the Texas side of Texarkana, Agim always considered grandma's house his home.

That guidance vanished for a seventh-grade Agim when she died in 2011.

What filled the void for Agim, along with grief, was more unsupervised time than he had ever had.

He didn't start stealing from the Dollar General store for fun or to impress friends. He says he did so to eat in the evenings after his school lunch couldn't quell the hunger anymore.

"I feel bad about it, but it was either steal or starve," Agim said.

Agim was home alone in his grandmother's house much of the time while his mother worked across the state line in Hope, Arkansas. The electricity came and went and he heated water on the stove, though a repossession agent once showed up to try to take that.

Agim started hanging out more with his friends. They weren't part of any organized gang, more of a clique really, but the trouble was real — eventually resulting in Agim's weekend in the juvenile detention center.

Football wasn't part of Agim's thoughts that weekend, but a move out of Texarkana was. He moved back to the Dallas area briefly as a ninth-grader before finally moving with his mother to Arkansas over the Thanksgiving break and attending a small high school outside Hope for the rest of the semester.

It was during that month, while Agim was playing basketball at Blevins High School, that Hope football coach Jay Turley first heard of this freakishly athletic freshman who was 6-foot-2, 220 pounds at the time.

At the semester break, Giddens moved down the road to Hope where she worked — and where Turley was excited and waiting for the chance to try to mold her son into a football player.

The results were nearly immediate, as were the accolades.

He had 16 sacks as a sophomore and 22 as a junior. By the time his senior season rolled around, Turley said teams wouldn't even run toward Agim's side of the field. He still had 24 sacks that year, though — along with spending time at running back, quarterback and kick returner in addition to his duties on the defensive line.

"I probably won't ever coach the No. 9 player in the country again, but that's not what I'm proud of," Turley said. "I'm proud of the way he overcame adversity in his life. To me, that's what football and life is all about."

Nearly every college in the country wanted Agim. He took visits to schools such as Stanford, Alabama, Auburn and Texas A&M, among others.

Arkansas wasn't on Agim's mind when he began the recruiting process, having grown up on the Texas side of the Texarkana border and fought his share of battles with his neighbors to the east. However, his outgoing personality matched that of coach Bret Bielema — to the point where Agim felt comfortable sharing the story of his eighth-grade arrest, and pride in what he had overcome, before committing to the Razorbacks. During one visit, Agim took Bielema to the empty home of his grandmother, 30 minutes away.

"I think he probably had to be mature in the adult world way before it's normal," Bielema said. "He had to experience and see some things in the world that matured him in the way that you see him today."

Bielema requires his players to do a minimum of two hours of community service per semester.

For Agim, it was an easy decision where to spend his time last year. He went back to Texarkana and shared his story with a group of approximately 20 teenagers in a detention center.

"Somebody in the juvenile center right now is locked up and probably thinking, 'I've got no way out,'" Agim said. "If by talking I can help somebody else who is feeling the same pain I was, I'll do it every time."

Agim started the final five games for the Razorbacks last season as a true freshman. Now 6-3 and 286 pounds, many expect him to use his quickness and power to approach an all-SEC level this season.

"It's on him to be as good as he wants to be," defensive line coach John Scott Jr. said. "I think people will be surprised when they see some of the things he's able to do."

Agim has his grandmother's name and face tattooed on his right forearm, and rarely a day goes by when he doesn't either think or talk about the impact she had on his life. He misses her, but he's found a way to channel that sorrow.

After enrolling at Arkansas during the spring of his senior year in high school, Agim is on track to graduate by the fall of his junior year — just in time to be finished with school in case he does decide to leave for the NFL.

His grades are good.

His life is great.

All according to the five-year plan he came up with following that weekend behind bars.

Exactly how his grandmother would have told him to live life.

"How she raised me when she was here, I feel like she made me the person I am today," Agim said. "I think she'd be proud, most definitely, about who I am as a person."