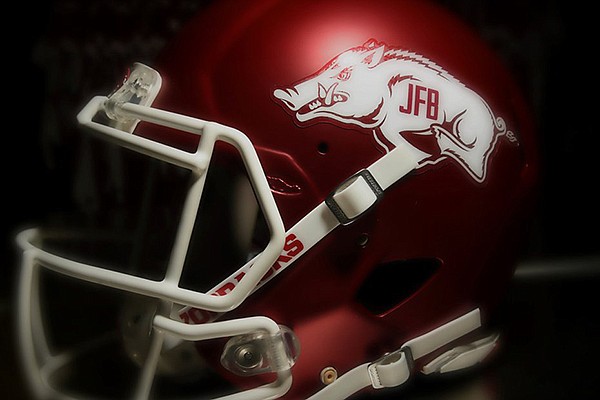 Arkansas will wear a special decal for its game against Florida A&M on Thursday, Aug. 31, 2017, at War Memorial Stadium in Little Rock.

FAYETTEVILLE — Arkansas will wear a helmet decal during its opener against Florida A&M on Thursday to remember longtime coach and athletics director Frank Broyles.

The initials "JFB" will be stamped over the top of the Razorbacks' logo on the side of the helmet. Broyles' legal first name was John.

A team spokesperson said the decal with Broyles' initials over the logo will be worn only during the first game of the season. A separate decal depicting Broyles' profile, headset and initials will be worn on the back of the helmets for Arkansas' other games.

Broyles died Aug. 14 from complications with Alzheimer's. He was 92.

Broyles served as Arkansas' football coach from 1958-76 and set several program records, including for wins (144) and conference championships (7). He coached the Razorbacks to the 1964 national championship.

Broyles was Arkansas' athletics director from 1973 until his retirement in 2007, and spent nearly seven more years as a fundraiser for the Razorback Foundation.