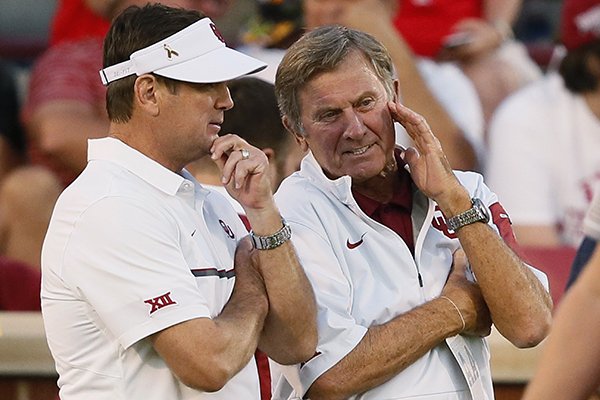 More than likely, Frank Broyles looked down and smiled Monday when it was announced by David Bazzel at the Little Rock Touchdown Club luncheon that the Football Writers Association of America will have a vote in the selection for the Broyles Award.

In 1964, Broyles and the University of Arkansas, Fayetteville won the FWAA Grantland Rice national championship.

Alabama lost to Texas in the Orange Bowl, and Arkansas -- which beat the Longhorns in Austin that season -- beat Nebraska 10-7 to finish undefeated.

The FWAA, which was formed in 1941 and started naming its national champion in 1954, voted the Hogs No. 1. Ironically, many of the voting members for the FWAA also voted in the AP poll.

Until 1998 and the start of the BCS -- which has evolved into a true playoff involving four teams -- winning the AP national championship was more attractive, but that season played a role in the AP moving its vote to after the bowl games in 1968.

However, the FWAA is a national organization with more than 1,200 members, and it has a long history of making a difference in college football.

It also selects prestigious awards such as the Eddie Robinson Coach of the Year, the Outland Trophy for best interior lineman, the Bronko Nagurski Trophy for best defensive player and a freshman All-American team.

In a joint effort with the National Football Foundation, it recently has added a weekly Super 16 football poll.

So the FWAA Grantland Rice national championship stands on its own merits, and it seems a natural fit to add a panel of writers who will have a voice in the Broyles Award.

If you Google "1964 college football championship," a picture of the Razorbacks is the first thing that pops up.

On March 3, Jimmy Dykes resigned his duties as the women's basketball coach for the Arkansas Razorbacks. On March 4, ESPN and the SEC Network were reaching out to him.

Dykes worked for ESPN from 1995-2014, when he was hired to coach the women's team at his alma mater.

Dykes was 43-49 and made the NCAA Tournament once at the UA, he was under pressure by the athletic department to quit, and Athletic Director Jeff Long said he appreciated Dykes' efforts but supported the decision to step down.

A few days ago, Dykes signed a three-year contract with ESPN and the SEC Network and will be a game and studio host during the upcoming season.

Dykes also will be the guest speaker at the Church of Rock Creek in Little Rock on Sept. 14. Tickets are $10 and include a barbecue dinner catered by Corky's.

Dykes, a devout Christian, is a great storyteller. He might tell the one about the time he was playing for Eddie Sutton (he lettered three years after walking on) and was at the end of the bench when Sutton motioned for him to come sit beside him, which usually meant you were about to substitute into the game.

"I was really excited," Dykes tells it. "Ricky Norton was the starting point guard, and he had blown out a shoe and was headed toward the bench. Coach Sutton looked at me and said, 'Jimmy, you look like you wear about the same size shoe as Ricky, take your shoe off and give it to him.'"

Prior to going to work for ESPN, Dykes did commentary for college basketball games for numerous independent companies for three years.