Hogs move on from Malzahn 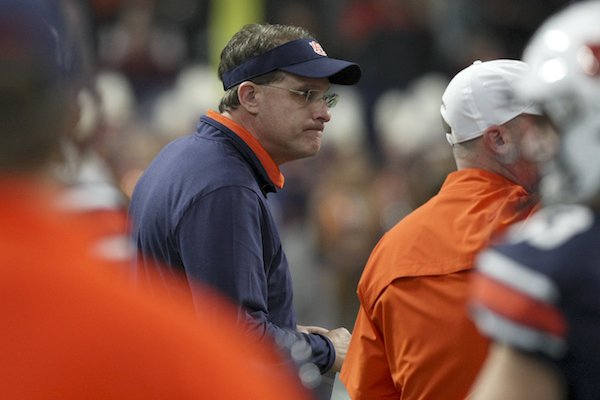 FAYETTEVILLE -- The Arkansas Razorbacks' hopes of bringing Gus Malzahn back to Northwest Arkansas faded Sunday afternoon, as the Fort Smith native and fifth-year Auburn coach agreed to a lucrative raise and a contract extension with Auburn, reported by The Associated Press and others to be a seven-year deal.

The new package, which will reportedly exceed $7 million in the final year, was first reported by 247Sports.

Malzahn had been the top target for the University of Arkansas, Fayetteville, which had presented a substantial offer. "One figure tossed around, according to the source, $50 million for seven years," CBSSports.com wrote of the reported offer from the Razorbacks.

Norvell, 36, has led the Tigers to a 10-2 record and a berth in the Liberty Bowl. When he did not appear on a Liberty Bowl teleconference at 2:45 p.m. Sunday there was speculation about whether he might be involved in talks with Arkansas officials. However, Liberty Bowl associate executive director Harold Graeter said Norvell was on a pre-planned recruiting trip and was in a plane at the time of the call.

Venables, whose No. 1 Clemson team will face No. 4 Alabama in a College Football Playoff game Jan. 1 in the Sugar Bowl, is scheduled to be in Little Rock today in advance of Tuesday's Broyles Award presentation at the Little Rock Marriott. Venables, 46, won the award last year as the top assistant coach in the country.

Reports of Malzahn's agreement to the new deal at Auburn broke shortly after his appearance on a Peach Bowl teleconference where he fielded multiple questions about his status at Auburn and the strong interest from Arkansas.

"Like I just said, I'm planning on being here at Auburn. That's where I want to be," Malzahn said when asked to clarify contract talks. "Nothing's changed since last night."

When a reporter pointed out that Malzahn kept saying "planning," he replied, "Well, that's just what I said. You just heard what I said."

The conference moderator then cut off a question about how flattering the offer to Malzahn was from Arkansas, his "home-state university."

The Razorbacks are conducting twin searches for a permanent athletic director and a head football coach since Jeff Long's firing as athletic director on Nov. 15 and Bret Bielema's dismissal as head coach on Nov. 24.

The UA Board of Trustees is scheduled to meet in Little Rock this morning. A source with knowledge of the meeting said items for discussion include issues at the flagship campus as well as some of the other schools in the system.

Bob Holt of the Arkansas-Democrat Gazette and Matt Jones WholeHogSports.com contributed information for this article.