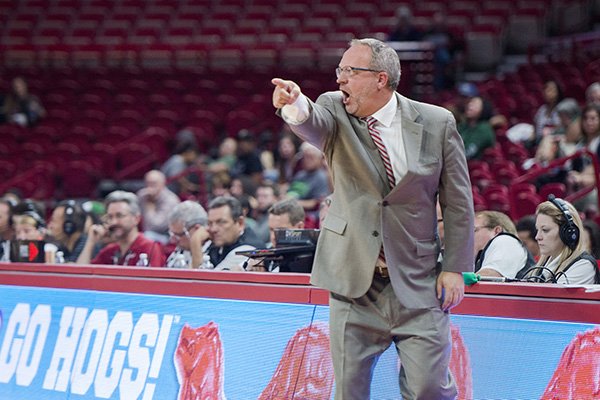 Arkansas coach Mike Neighbors is shown during an exhibition game against Northeastern State on Thursday, Nov. 2, 2017, in Fayetteville.

One of the top junior post players in the nation has committed to Arkansas women's basketball Coach Mike Neighbors.

"She really, really liked him," Susie said. "He’s such a great person and coach, so when he moved to Arkansas it was kind of a no-brainer. Destinee is an introvert. She’s kind of a quite shy kid. She’s big, but she’s real quiet, and he understands that personality and lets her be her, and I think that’s important."

Susie said she's happy with her daughter's decision despite numerous schools hoping to sign her.

"But we kind of knew we were going that direction so we really didn't pursue too much," Susie said.

Oberg has been on colleges radar for awhile.

"She got her first offer as an eighth-grader from the University of Minnesota," Susie said.

She's the second 2019 commitment for the Razorbacks. Lawton, Okla., Eisenhower wing and 2019 prospect Ginger Reece, 5-10, pledged to the Hogs in June.

ProspectsNation.com rates Oberg as the No. 4 post and No. 26 overall prospect in the nation for the 2019 class.