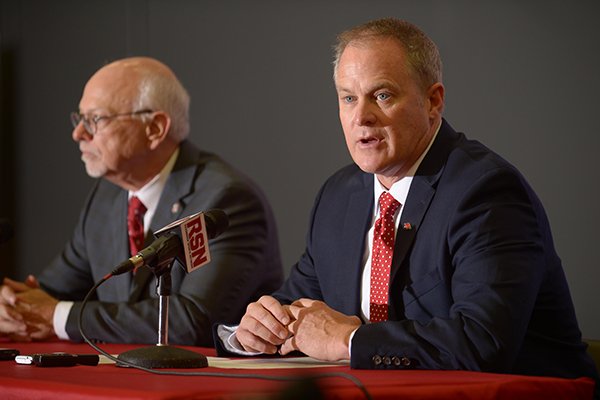 — Been an exciting week as they've hired an AD and are very close to hiring a new football coach now.

— Passion of Razorback fans has been amazing. Razorbacks represent the entire state.

— Thanks the advisory committee they assembled for the search.

— Thanks Julie Cromer People for stepping up as interim AD. "She's done a marvelous job" the last few weeks.

— Found what they wanted in an AD. Had success at two previous jobs as AD. Cares about student-athletes. Has a track record of smart head coaching hires and maintaining those relationships. Known for having a great vision. Most importantly, understands the amazing situation here and what the Razorbacks mean in this state. Being a former FCS athletic director of the year didn't hurt his chances.

— Honored and privileged. Just met with the entire athletic department and they taught him how to call the Hogs.

— Thanks Steinmetz and the board. Thanks Houston's board. Had great coaches, administrative and support staff and faculty at Houston.

— Had friends across the country who've reached out to him and his wife Jennifer over the past 48 hours with well wishes and compliments about Fayetteville. Made it an easy sell.

— Three passions are faith, family and college athletics. Has three boys. His oldest son is a football player at Marshall. Jake, his middle son, is in high school finals. Their 13-year-old is a new teenager and has an attitude with dad now. Has an important junior high basketball game tonight.

— Jennifer has never complained about a move and done an amazing job raising the boys when he hasn't been able to be there.

— Not from Arkansas and doesn't have ties, but is a quick study. Will listen intently and talk to people to understand the culture here and across the state. Promises that his family will become engrossed in the community and the state. Will never be a true Arkansan but hopes to earn the right as an honorary member soon.

— College athletics are like a front porch for a state.

— Wants to have success academically by earning degrees, athletically by winning championships and in their personal life by leaving ready to conquer the world. When they do this, the front porch will be good.

— "An era of unprecedented success is about to start at the University of Arkansas and we need to come together now more than ever."

HY: Does have a 100-day plan and did present it to Steinmetz. Engages him in the university and community. Involvement in the search has been being a resource for Julie while she leads the search. Only been officially hired for 36 hours, but has been a resource since then.

JS: Yurachek called and asked if the job was still available after the Arkansas-Houston basketball game and he said yes. Had already planned to be at the game with a lot of people, so it worked out well. Stacy Lewis was there.

HY: Talked to Mike Anderson and said from Saturday that went from being a great win to today that being a bad loss.

HY: Will let the chancellor answer the question about the future of games at Little Rock.

JS: Been engaged for months on Little Rock and just met with some people about it. Haven't had a chance to talk with Yurachek about it yet.

HY: In the process of hiring a football coach. The SEC West is the toughest conference in football and it's important to hire the right guy. Thinks they're on the brink of doing that.

JS: Gathered a list of about 50 people for the AD role. Hunter's name came up more than probably anybody. Were looking for former student-athletes to be part of the committee, but his name was on there before the committee was formed. Stacy Lewis being in Houston and having a spouse who led the UH golf program, that was an input that valuable in vetting the candidate. She was very valuable and he's indebted to her.

JS: Didn't consult with Jeff Long for names for this search.

HY: Didn't reach out to Jeff. Has colleagues around the country who have a better relationship with Jeff who he reached out to to get a feel for Arkansas.

HY: First trip to Fayetteville. Went to Harding University one time on a visit. This business has taken him all over the country. They adapt to where they're at If it was at the beach, they had jet skis and were on the water. In Houston, he has a good pair of boots and goes to the rodeo. They'll do the same at Arkansas.

JS: The process went from 50 to about 20 or so candidates and discussing them in the committee about fit. There were some who weren't likely to leave where they were at. From that, they cut the list to about seven candidates. From there, the search firm came in and made the contacts. Also asked if they had other names, but they already had the same names. They did background checks and helped with contacts.

From there, made contact with seven or eight. Three weren't interested in leaving their current position. That left five. Had extensive conversations with five, then cut it to four and personally visited with those four. Took people from the advisory committee to the meetings. Stacy was in the Hunter Yurachek interview. From there, came up with the final choice.

HY: Will find out in the very near future that he is "very comfortable, very comfortable" they're moving in the right direction with the football program.

HY: Was presenting an award for an NCAA sportsmanship committee when he was at Harding.

HY: The 100-day plan is about him being engaged in the community, asking a ton of questions to a lot of people. Have very few ties to the state, so he has to spend the first 100 days listening and learning before he develops other plans.

JS: Facilities are a big issue as far as being competitive. Yurachek has made great progress at Coastal Carolina and Houston in fund-raising and getting facilities done. The number is close to $250 million at Houston in construction underway. Keeping up in the SEC is important, so having someone who's managed this successfully was a very big priority.

HY: Excited to be part of the finishing of the end-zone project. It's been in progress. Was part of $230 million worth of new projects or enhancements, including a $125 million football facility, a practice facility for basketball and football and are now constructing a basketball facility.

Has been in communication about the new tax bill that could impact giving to the UA. It has a negative effect on the UA and it would be good if several things were removed from the final bill.

HY: Doesn't think the current climate of big coaching contracts and buyouts is sustainable. Had $30-45 million budgets at his last two schools and they're competing at the same level now with SEC schools. Was at Vanderbilt before and it's a difference now. Losing football games is being terminated with cause. The protection coaches are provided in their contract is ludicrous. Wants to be a leader in how contracts are written. Understands that there are risks and pressure in coaching but those kind of contracts are mistakes. For someone like Kevin Sumlin to get paid 100 percent of his contract, that's a mistake. He knows they'll probably hold it against them, but that's a mistake in the industry.