State of the Hogs: Yurachek brings passion to the front porch 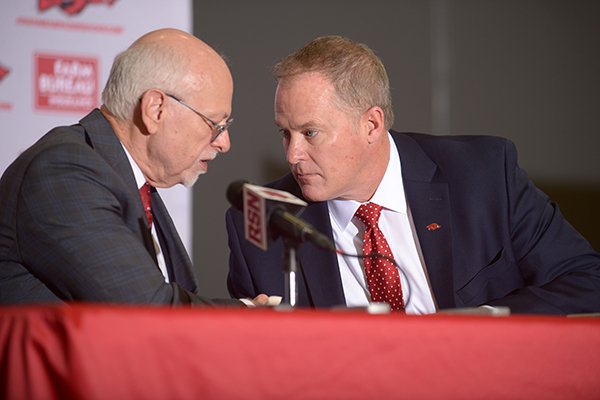 FAYETTEVILLE — Hunter Yurachek said he traded jet skis for a cowboy hat and boots to attend rodeos when he made the move from South Carolina to Houston.

The new athletics director at Arkansas isn't sure exactly what his next hobby will become, but Yurachek was clear that Texas knowledge will benefit both him and the new football coach.

Yurachek knows the key to winning in the SEC is “about the Jimmys and the Joes.” In other words, it's about who has the best players. He is aware that Arkansas can find them in the Lone Star State and that goes for all sports.

The new football coach will be Chad Morris, the coach at SMU the last three seasons. Morris coached 16 years in Texas high school football, winning state titles with back-to-back 16-0 records at Lake Travis outside Austin in 2008 and 2009.

Ironically, Yurachek said he and his former Houston boss, Mack Rhoades, had wanted to hire Morris to coach the Cougars three years ago before hiring Tom Herman.

“SMU beat us to him,” Yurachek said. “They were ahead of us in starting their search and they had snapped him up.”

Yurachek was hired Monday afternoon as Arkansas AD. He was quickly brought up to speed on the football search and applauded. He said he was “very comfortable it was headed in the right direction.”

Later, he said, “It was going great,” noting Morris was already the target of interim AD Julie Cromer Peoples. Chancellor Joe Steinmetz gave him the run down on the search and Morris was another easy sell, just like Arkansas was for Yurachek.

Stacy Lewis did the selling for Arkansas with Yurachek. She's married to current Houston women's golf coach Gerrod Chadwell. Lewis was on the advisory committee helping Steinmetz in the search.

“I called Stacy to get her thoughts on the UofA,” Yurachek said. “Some may think I had an advantage with Stacy on the committee. What it did was give me an advantage in gaining insight.

“Stacy did a great job of selling the UofA. She was passionate.”

Steinmetz said, “I'm indebted to Stacey. She stepped up.”

The clear message received from Yurachek – and those who know him – is that he's about relationships. His first mission at Arkansas is exactly what he's done at other stops, a 100-day process that is almost all about listening.

“I'm not an Arkansan and I don't have Arkansas ties,” he said. “So I have to spend the first 100 days listening and learning.

“It's just something I do. I'm going to ask questions and know that I will become very proud of our state.”

There was mention of Frank Broyles in his first comments, before the first media question.

“I embrace the UofA history and an incredible leader like Frank Broyles,” he said, quickly adding that he's going to be “a quick learner” on every facet of the state and the Razorbacks.

“I'm going to learn the culture and be a part of the fabric of the state. I'm not a true Arkansan, but I will earn the right to be an honorary member.”

There was talk about what he thinks the Razorbacks mean to the University of Arkansas and to the state.

Yurachek said it was about coming together as a state to get everyone on the front porch, despite some disagreements.

Some of his new coaches were beaming in the background. Baseball coach Dave Van Horn and men's track coach Chris Bucknam said the scouting report is out on their new boss.

“I've checked and they are sad to lose him where he's been,” Van Horn said. “That's great to hear. He's been good to every sport. He's given baseball great facilities where he's been.”

Bucknam pointed at a successful track program at Houston as evidence. He agrees that working hard to recruit in Texas is always a key for successes at Arkansas.

“He knows that and we know it,” Bucknam said. “I know that's going to be part of the path for football success.

“What I know is that our track program can and does help football. We are all about bringing fast people here. We've won the national championship in the sprint relays: 4x100 and 4x400. We can help football and vice versa.”

Ken Hatfield is the most successful UA football coach with a 55-17-1 record, a winning percentage of .760. That's an average of nine wins per year. His record at Air Force before Broyles hired him was an unimpressive 26-32-1.

But his track record has been consistent winners, including 169-38 as a high school coach in Texas. His style is up-tempo, hurry-up on offense. He worked in that system as offensive coordinator at Tulsa, then installing the same system at Clemson where he recruited quarterback Deshaun Watson.

Hatfield was asked by UA officials to help define the most important ingredients needed in a UA football coach last weekend.

“We asked Coach Hatfield and he told us innovative offensive mind and the ability to recruit Texas,” said a source.

Hatfield said Morris fits all of that and more.

“In everything I can see, Chad is a great choice,” Hatfield said. “He can step in any school in our state, nearby states and they know who he is and what he's done. Every coach knows that.

“Texas high school coaches are going to listen to him. They know all about him.

“It's important to know what you need to win in the SEC West. It's different at Auburn and Alabama than it is at Arkansas. You need to fit in Arkansas. Chad fits here.

“I think Chad can take information to Texas high school players about what's worked at Arkansas for the last 50 years and that formula includes Texas players.

“It's East Texas and Dallas and it's also Houston. I know those areas have been good to Arkansas. We just have to work it in those places. You go in some of those places and there is a school every 10 miles with athletes who can run, jump and play sports all year long. It's great football.”

Yurachek knows the key is to get football going at Arkansas again.

"We've got the foundation, great facilities and great people in the administration and great coaches," he said. "We need a football program that can compete for the SEC championship. Football is what drives the train. For our entire program to be successful, we need football to be successful."

He said to do that, it's all about relationships. Clearly, that's what Hatfield was talking about with Morris. It's the same with Yurachek.

“He's a people person,” said Matt Zimmerman, who saw it first hand Saturday night in Houston before the Arkansas basketball game with Houston.

Zimmerman is Director of Basketball Operations, also the analyst on basketball broadcasts. The crew that did the broadcast with Zimmerman included a producer borrowed from the UH staff.

“I noticed this guy walking down the front row with their big boosters and alums shaking hands,” Zimmerman said. “He went around to the other side with us and talked with everyone at the table where the radio crews were seated. He shook hands with our producer. He went person by person, sometimes hugging folks.

“That kind of stuck with me, although I didn't know who he was. I know now that he's my new boss.”

With that Zimmerman showed a text he got Monday when word began to hit that Yurachek had been named UA's new leader. It was a great scouting report for someone who prepares scouting reports for Mike Anderson.

“I have this friend that had been around him at Virginia and again somewhere at another stop in Carolina,” Zimmerman said. “He texted me, 'You got a good one.' Then, a little later came another text, 'No, he's a great one.' They hate losing him anywhere he's been. They loved him in Houston. I heard that Saturday.”

Yurachek provided a bit of a self scout, too.

“I just told my new staff what I'm about in a nutshell,” he said. “It's faith, family and college athletics.

“I hate it that my three sons can't be here today. I'll tell you that I've been all around the country and my wife, Jennifer, has made every house we've bought our home. She never complained about one move.”

I asked about faith.

“I was raised Catholic,” Yuracheck said. “Jennifer is Baptist. So we met in the middle. We are Methodist.”

That's interesting. Broyles and his replacement, Jeff Long, were both Methodists, too.

The first inkling of who Yurachek is like would suggest the new Methodist in charge of the state's front porch has more in him like Broyles than his religion.

“I never got to meet Coach Broyles, but I watched him when I was at Vanderbilt,” Yurachek said. “What he had was incredible passion that always came through.”

That seems to be the case once again, and he knows not to throw away his cowboy hat and boots.