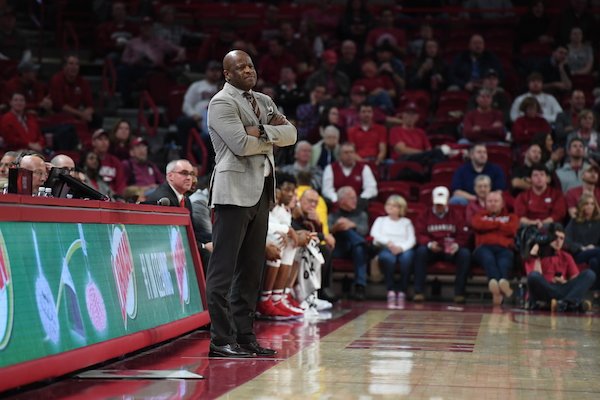 Arkansas coach Mike Anderson stands on the sideline during the Razorbacks' 92-66 win over Colorado State Tuesday Dec. 5, 2017 at Bud Walton Arena in Fayetteville.

FAYETTEVILLE — Follow along as Mike Anderson and players review the Colorado State win and preview the matchup with No. 14 Minnesota.

— Talk some hoops and want to welcome Chad Morris to the Razorback family. Got a chance to be there this morning. Seems like a coach that has a lot of energy. That gets contagious with your team. Excited for him and Hunter Yurachek.

— Minnesota took Arkansas to the woodshed last year and has most of those guys back. Mason and Murphy are leading the charge. Murphy's outstanding. Undersized forward. Lynch's shotblocking is good. The average 17 assists and 87 points a game.

— Richard Pitino has done an outstanding job. Got to the tournament and a ranked. Going to have to play some good basketball. Coffee played outstanding last year. Hogs had 21 turnovers against them last year, so they have to cut down on those. They do a great job on the boards, so Arkansas has to match that.

— Bud Walton should be alive.

— Minnesota lost a conference game at Nebraska, but we know how tough it is to win on the road.

— Jaylen Barford and Daryl Macon have a year of seasoning and understand how to go on the road. That game last year was close the first 10 minutes, then Arkansas couldn't score. Minnesota spread the floor, got dunks and 3s, the crowd exploded and they got rattled. Turnovers led to easy baskets. Hogs played hero ball. Minnesota didn't let up.

— Thinks they've learned what they have to do on the road: defend and take care of the basketball.

— Rebounding will be key.

— Was sorry to hear Eric Curry is out for the year. Someone they recruited. He played well for them.

— This goes along the same lines of playing in the PK-80. In order to be where you want, you have to play really good teams. Minnesota lost to a very good Miami team and at Nebraska. They won at Providence, which isn't an easy place to play.

— Mason's composure impresses him. He's an all-conference senior. Possibly four first-team all-conference players on their team. Have to limit them and get to their bench. Hogs' bench can be a strength.

— The Colorado State game was brought on by football.

— When all your sports are doing well, it's a great atmosphere and experience for fans and student-athletes. It all goes hand in hand. Football has big weekends, tailgating. Winning makes it a lot more fun.

— Want to put the peddle to the metal like Morris.

— Dustin put in the work in the offseason on his shot. Sometimes you revert to bad form you've had since you were young, but he's worked on having a repeatable shot. Being on balance is key.

— Was looking for energy against Colorado State, which is why he played the lineups he did and the guys at the 4 he did. It's December. Some guys can get it a lot quicker than other guys. The guys who will get it get to play.

— Adrio did take a shot to the ribs in that game. Asked to come out because he got hit in the stomach, which is why he may have not played much. But Dave England hasn't said anything about it so he must be OK.

— Daniel has made an impact. Colorado State was fronting and he pinned them and was able to finish. He's an energy guy, a big guy that can run the floor. Hopefully as the games progress you can see that even more.

JB: C.J.'s having a great year so far. Likes how he's shooting the ball. Has a lot of confidence.

DM: C.J. puts in a lot of extra work, so obviously it's paying off.

DM: Big to have another scorer step up. This is what he wanted and worked for.

JB: It's big for the team because the scouting report is always to contain those 3 seniors. He's their secret weapon.

JB: Minnesota was the first road game last year. It was a cold ride and flight back home.

DM: Couldn't blame them for the outcome. They were still learning how to play together. They were on the road early this year.

DM: It's another game.

DM: Playing him a lot tougher. Got to adjust and have your best players play well.

JB: Have a target on your back. Everybody has to step up and make plays.

DM: We've just got to go out and play to start games. Been hesitant on shots and what to do as a team, looking at coach.

JB: Just have to go fight and play hard. Listen to what coach is saying.

JB: C.J. is pushing back now and being more physical.

DM: Put C.J. through a lot last year in practice and he responded. Helps going against good players.

DM: Been pretty tough the past couple games. Offense comes and goes. Has to be more aggressive. Kind of been shying away from the moment. Has to keep being as aggressive as he was at the beginning of the season.

JB: Alabama went through playing with 3 players against Minnesota, not them.

DM: "Bob, you are a funny guy." "You really think we'll get down to 3 players? You're amazing. It wouldn't be the same if you weren't in here."