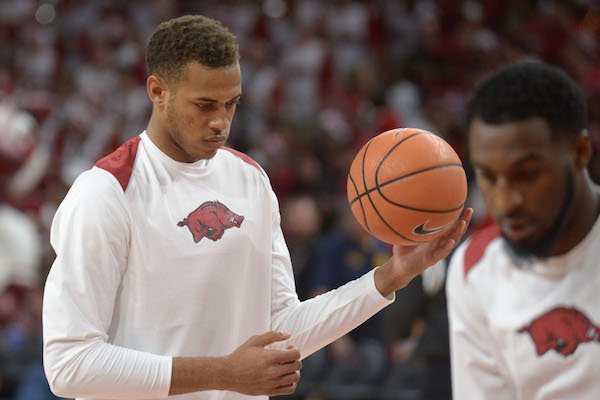 FAYETTEVILLE — Five takeaways from Arkansas' 95-79 win over No. 14 Minnesota.

It was going to happen sooner or later, but Mike Anderson picked a big moment to insert freshman center Daniel Gafford into the starting lineup.

Foul trouble has been an issue early in the year and was again Saturday, but the Razorbacks are a different team with Gafford on the floor. That was the case against the Golden Gophers as he poured in 16 points on 8 of 8 shooting with seven rebounds and a career-high six blocks, including several of emphatic variety.

The rejections and his three dunks got the Bud Walton Arena crowd fired up and he also showed off his continued, rapid progression from a skill set standpoint. He scored in a variety of ways, spinning from the perimeter into an impossible-to-block runner on one play and drop-stepping into the body of his defender to create separation before finishing over the top on the block.

Gafford only played 21 minutes because he had four fouls of his own, but they were an impactful, productive 21. He just keeps getting better and there’s no reason to think his ascension will slow down.

Minnesota coach Richard Pitino posited that Gafford could be a first-round pick down the line. He played like one Saturday.

The sophomore guard wasn’t getting many looks and wasn’t knocking down the ones he got. That has changed in a big way.

Jones is 18 of 34 from 3-point range in the past five games, including hitting a career-high five on just seven attempts Saturday. He’s done a good job moving without the ball, teammates are finding him when he gets open and he’s shooting with confidence.

He scored 15 points in just 15 minutes off the bench against the Golden Gophers, providing an infusion of offense when he checked into the game. At this point, every shot he takes looks like it’s going to go in.

He’s averaging 15.2 points the last five games and has morphed into an instant-offense threat as a reserve. Arkansas was plus-12 with him on the court Saturday and the Razorbacks’ offense has been ludicrously good with him in the game spacing the floor this season.

It’s unrealistic to expect him to shoot 53 percent from 3 the rest of the year, but the last five games have shown how impactful he can be when his shot is dropping.

Daryl Macon had a scoreless first half, but played a big part in Arkansas taking a 50-42 lead to the locker room.

The senior guard dished seven assists in the opening half, setting up teammates time after time by using his own gravity on the defense to get them open looks.

Macon finished with 12 points and tied his career-high with eight assists, salvaging a poor 4 of 12 shooting performance with some of the best playmaking of his career.

In particular, his ability to operate as a maestro out of the pick-and-roll stood out.

Arkansas has struggled to involve its bigs off ball screens for much of the last two years, but Macon hit rollers and poppers time and time again Saturday, producing open looks for his teammates. Dustin Thomas hit two jumpers to continue his hot shooting play of late. Adrio Bailey and Gafford hit jumpers, too. Many of those shots were set up by Macon.

Arkansas started the game with 15 assists to just one turnover and finished with 23 helpers on 39 made shots. Macon wasn’t the only one sharing the ball, but his play was the most notable and impressive.

Arkansas had 13 turnovers in the embarrassing 91-65 loss at Houston a week ago.

Not a huge number, but the Razorbacks only forced 12, which made it a rare occurrence when they lost the turnover battle.

In the two games since, the Hogs have taken care of the basketball at an elite level. The Hogs turned it over just five times Tuesday in the win over Colorado State and just nine times Saturday. The minuscule 8.7 turnover rate in those two wins would put the Razorbacks first in the nation by nearly four percentage points for the season.

Macon has 15 assists to three turnovers in the wins. Anton Beard is 8 to 2, Barford is 7 to 1. Those three seniors are Arkansas’ primary ballhandlers and are charged with doing a lot of the creating on offense.

If they combine for 30 to 6 assist-turnover ratio, Arkansas will be tough to beat.

Senior forward Dustin Thomas started for the second straight game and made an immediate impact Saturday, scoring all six of his points in the first 2:15 of the game.

He wound up playing just 11 minutes, but not because his play worsened. Arkansas just has a log jam at the 4 now that he and Arlando Cook are back.

Combined, the group scored 16 on 7 of 12 shooting while adding six rebounds. That kind of scoring production from what is the least offensively talented position on the team is a huge bonus.

Anderson has options at the 4 and can go with a hot-hand approach. It’ll be interesting to track how the minutes are divvied up the rest of the year.