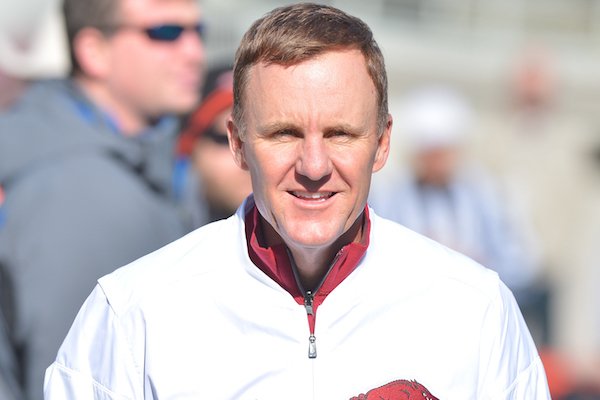 Arkansas head coach Chad Morris during pregame before the 4A State Championship in Little Rock. Special to the Democrat-Gazette/JIMMY JONES

Receiver Mike Woods has flipped his commitment from SMU to Arkansas and becomes Coach Chad Morris' first commitment at Arkansas.

His relationship with Morris and receivers coach Justin Stepp made his decision to be a Razorback easy.

"I chose to be a Razorback because Coach Morris and Coach Stepp were a big part of my decision at SMU," Woods said. "When they decided to leave and said they would bring me with them that was that."

He plans to graduate in December and enroll at Arkansas in January. Woods said Morris and Stepp are genuine.

"When they talk to you they're more genuine and they really mean what they say and it's like they actually care about you and instead of just learning about them and their football team, Woods said.

Woods, who plans to officially visit Fayetteville next weekend, described what Razorback fans will see in the future.

"Deep threat, a guy that can take a screen to the end zone," Woods said. "A guy that can go up and get the ball. A physical blocker I like blocking. I like disrespecting corners like that. I just like having fun."

He said fans should be ready for an exciting offense under Morris.

"If they haven't heard already, this offense is going to be real fast and explosive and we're going to score a lot and fast," Woods said.

Woods has a 3.6 grade point average and plans to major is sports management so he can stay in football after his playing days are over.

"I just know I want to do something with football," Woods said.