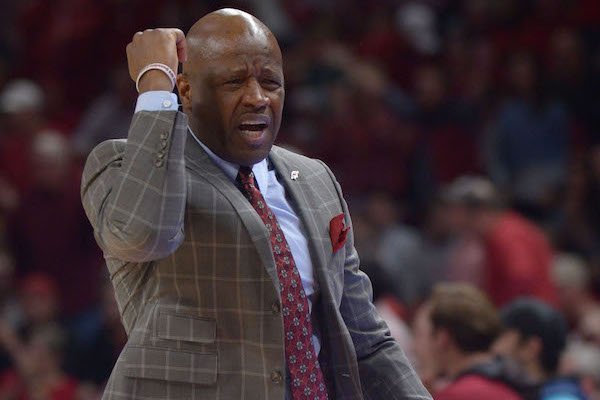 FAYETTEVILLE — Follow along as Mike Anderson recaps the win over Minnesota and previews the matchup in Little Rock with Troy.

— Seems like it's been a while since they've played a game, but finals are going on. This is the last day. Expects players to be giddy and amped up in practice today before they get done.

— Nothing has changed with Khalil Garland's status, but they will redshirt him.

— Troy was probably picked to win their league, went to the tournament last year. Played a tough schedule this year, lost by 8 to Kentucky. Have a good 1-2 punch. Athletic team with good guard play.

— Big task for Arkansas is staying focused. It's a business trip. These are fans who don't always see them. Players will be in front of family and friends.

— Thinks the Little Rock guys are excited. Last trip for Anton and Daryl, sure they want to impress. Darious Hall is from the area and he's probably pretty excited.

— Anton lost weight, probably back to playing at a level he thought he could play. Being a leader, someone who can command attention on the floor and calm the team down. Distributing the ball at a high level. He's the leader of the defense, changing it out on the floor.

— Daryl can score and he's becoming a little more well-rounded and trying on defense. When you're not scoring, what are you doing to win. The tape showed he did a lot of little things, back screening, making the extra pass.

— Darious is doing it on the defensive end.

— Houston was the first road game. Getting pats on the back is always going to be a concern, but they've been through that now. Every game is important, especially with this type of schedule.

— It's a game of runs with the way they play. When their bench is playing well and they're defending, they have guys who can score. Have had less than 10 turnovers the last two games and are turning teams over. There'll be back-and-forth games that come down to possessions, but they're playing efficient basketball.

— Thinks assist numbers being up is a combination of things. They're more experienced and have better understanding. Guys trust people and know they don't have to be that guy. Guys like Barford and Macon are natural scorers. Now they're a lot more comfortable and trusting each other. Helps that you can lob it up to Daniel. Forcing turnovers helps lead to assists in the open court.

— Gafford is ready to keep starting, he's earned. Doesn't care if they're seniors or freshman, if you earn the right to do it, you're there. Have to earn it every day but he's doing that. Was amazing how putting Anton in the starting lineup made everything better.

— Gafford commands attention offensively, is a rim protector, rebounds above the rim. Dustin Thomas is more effective because they have to pay attention to Daniel.

— "Very optimistic" Khalil will be able to play next year. There was relief when he got onto the floor. He's able to do limited stuff.

— Gotta be there to see it Saturday with no TV. Like back in the day.

— Person is really impressive. Saw him as a freshman or sophomore and he's gotten a lot stronger. Good shooter. They utilize him well off screens and pick and pops.

— Gafford has a chance to be a special player. There'll be peaks and valleys. Just like Bobby, he doesn't want to be a very good player, he wants to be a great player. Bobby is a mentor. Has a chance to be one of the most athletic big guys they have. The skills have to come along, but you can't knock the desire.

— The talent in Central Arkansas has put out some very good talent from when he was here last. The high school coaches, AAU programs have basketball year-round. Memphis used to be the hotbed, now there are players in the state of Arkansas. That's a credit to high school coaches and what they're doing. They're glad it's been like.

AB: Likes playing at home. Heard tickets are almost sold out, so it'll almost be like Bud Walton.

DM: Not surprised at all by the team's success. They work hard and have nice pieces that start and come off the bench. This is what they're supposed to do.

AB: This is nothing new. There's stuff they have to work on and keep getting better at. This just comes with it.

AB: They did lay an egg at Houston and that's just part of learning. Felt like defense didn't travel. That's what's important.

DM: Want to go out in Little Rock on a bang, but they still have to play basketball as a team. Can't play individual ball.

AB: Going to be a lot of emotion starting off because it's their last home game in Little Rock.

DM: The journey has played a big part in his maturity. Going to JUCO really humbled him. "I was just waiting on that offer. It took forever but I was patient."

AB: Darious Hall has made a big impact. Has defensive ability and a good basketball IQ.

DM: He plays an energy role.

DM: The game not being streamed makes it fun. If you're not there, you're going to miss the show.

AB: Heard Troy brings a lot of energy on the defensive end.

AB: Central Arkansas high school basketball is one of the most talented areas in the state.

DM: Feel like they have some of the best talent in the country but they're from Arkansas, so 9 times out of 10 they get overlooked. "Those boys get overlooked down there, even when I was coming up." Lot of players that should get recognition and they don't. That's why he has the chip on his shoulder. Knew he was coming back to play with Anton before the offer.

AB: Always stay positive with Khalil. He's one of the most talkative guys on the team. They feel sorry for him but don't want to show it. Tough love is the best sometimes.