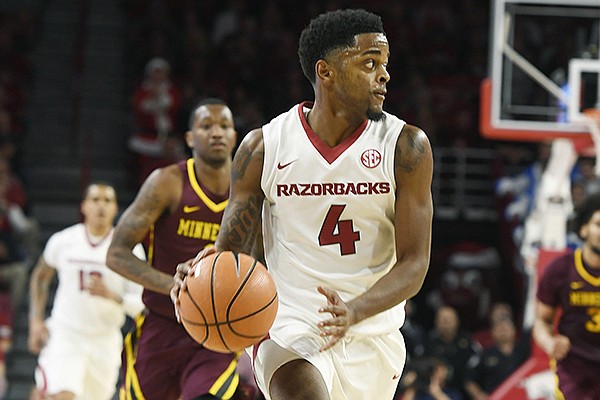 Arkansas guard Daryl Macon looks to pass the ball against Minnesota in the first half of an NCAA college basketball game Saturday, Dec. 9, 2017 in Fayetteville. (AP Photo/Michael Woods)

FAYETTEVILLE — Daryl Macon knew Arkansas would be good this season when he decided to return for his senior year.

Even the confident guard couldn't have known Arkansas would be this good.

Led by Macon, fellow senior guard Jaylen Barford and standout freshman Daniel Gafford, the surging Razorbacks (7-2) are doing more than just winning this season. They're outscoring opponents by an average of 23 points per game in their wins and nearing a return to the rankings for the first time since the end of the 2014-15 season.

Arkansas is ninth nationally in the NCAA's RPI ratings following last week's 95-79 win over then-No. 14 Minnesota . It's a spot that's been earned with a difficult non-conference schedule that has included games against the likes of the Golden Gophers, Oklahoma, No. 7 North Carolina and UConn, among others.

"I'm not surprised at all," Macon said. "We work hard, we've got a lot of nice pieces that start and come off the bench. It doesn't surprise me that we beat a ranked team by 20. That's what we're supposed to do."

The hot start comes on the heels of the school's second NCAA appearance in three years last season, and it's come against quality opponents that have combined for an overall record of 59-32 to start the season.

The Razorbacks fell short last month in their rematch from last year's NCAA Tournament against the Tar Heels , but they bookended that loss with convincing wins over the Sooners and Huskies. And as good as Arkansas has been overall, it's been even better at home — winning its five games by an average of 23.4 points per game.

"Let's knock on wood, and hopefully we can continue to be consistent in our effort," coach Mike Anderson said. "I think we're playing efficient basketball, and that's the result."

The formula for early success has featured plenty of Macon and Barford, who both returned after briefly entering NBA draft consideration following last season. The 6-foot-3 Barford leads Arkansas and is second in the Southeastern Conference with 19.9 points per game, and Macon is second on the team at 14.3.

As good as the guard duo has been, Gafford has turned Arkansas from an SEC hopeful into a likely contender. The 6-foot-11 freshman was named the SEC Player of the Week following his 8-of-8 shooting performance in the win over Minnesota. He is shooting 69.5 percent (41 of 59) — courtesy of 21 dunks for the season — and averaging 12.4 points.

The athletic Gafford is also averaging nearly two blocks in only 19.1 minutes per game, and he's solidified a team whose postseason hopes are growing each day — even if Macon is doing his best to temper those expectations.

"I think our ceiling is very high, but we can't look months ahead," Macon said. "Yeah, we're playing good, playing good as a team and winning by a large margin, but we've got to stay humble and keep working."