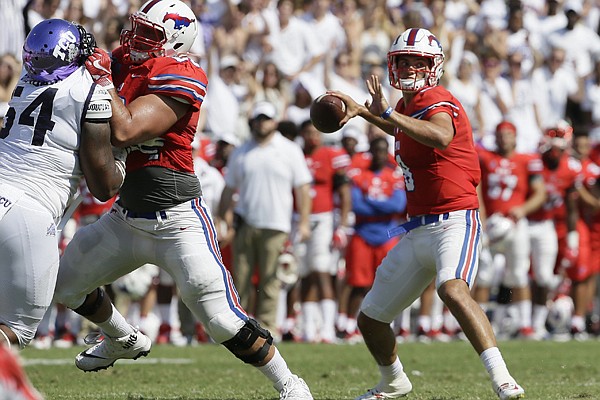 Chad Morris and Arkansas both lost to TCU this season, but in very different ways.

The Razorbacks were beaten 28-7 in Fayetteville as both offenses struggled in an ugly, early September ballgame.

Morris’ SMU team played the Horned Frogs a week later in Fort Worth. The Mustangs entered the Battle for the Iron Skillet a 22-point underdog, but used explosive offense to put a scare into TCU into the fourth quarter of an eventual 56-36 loss.

The Mustangs didn’t have the defense to hang with a ranked Big 12 foe, but Morris’ creative offense helped them take an early 19-7 lead and gave them a shot to pull the upset until late when the talent disparity became evident.

On the surface, SMU performed markedly better against the Horned Frogs than Arkansas did, despite having less collective talent as a whole.

The Mustangs struck first on the opening drive of the game, using five-wide, empty sets early to spread the field after a penalty, then going with this motion-heavy third-and-1 call, a bunch formation that morphs into a Wildcat run for the first down.


On the very next play, Morris dials up trickery, calling a flea flicker that catches TCU off-guard and results in a 58-yard touchdown to LSU transfer Trey Quinn.


Third-down creativity was a routine occurrence for SMU. Facing third-and-3 on its second drive, Morris spreads the field, sends a receiver in motion to draw the defense’s attention and calls a wheel route for running back Braeden West, who is wide-open for a 32-yard gain.


More trickery on the very next play, with quarterback Ben Hicks throwing a lateral to Hicks, who rares back and finds West for a 34-yard gain.


SMU used the Wildcat near the goal line to punch it in on two tries, but did so by motioning into the alignment rather than just initially lining up with it.


By spreading it out, the Mustangs were able to find openings down the field.


Receiver Myron Gailliard has space to make a play and beats his man on a simple seam route for a 22-yard gain.

One significant change with Morris at the helm at Arkansas figures to be the kind of quarterback he recruits.

Under Bret Bielema, the Razorbacks generally targeted pro-style passers who preferred to operate in the pocket. At Clemson, Morris recruited dual-threat quarterbacks Deshaun Watson and Kelly Bryant. Having a mobile quarterback is something he values, an added dimension that can make an offense that much more difficult to prepare for and contain.


Formationing set the stage for this third-and-long conversion. The Mustangs line up with trips to the left and a single receiver split wide right. The combination of routes ran off defenders and opened up a throwing window for Hicks to find James Proche, the middle receiver, for a 19-yard gain and a first down.


It’s important to note the Mustangs threw the ball on just 50.4 percent of their plays in the regular season this year. They were dedicated to and had success running the ball, too, in both the TCU game and for the season, where their 5.01 average per rush was tied for 27th nationally. The Mustangs had success spreading teams out, creating alleys to run through.


SMU lines up with four receivers and TCU only has six in the box even after one motions into an H-back spot. Both safeties are deep, too, because of the threat of the pass, leaving ample room for running back Ke’Mon Freeman, who scores from 34 yards out to cut the TCU lead to 35-29 late in the third quarter.

To that stage, the Mustangs hung right with TCU blow-for-blow thanks to their offense and creative playcalling. A pair of costly Hicks fourth-quarter interceptions, including a pick-six, shifted the tenor of the game into TCU’s favor, but SMU did have one more big play left.

Facing third-and-7, the Mustangs spread the field with three receivers to the field and a single receiver in the slot to the sideline. SMU went empty by sending the back in motion to the sideline, a five-wide look that allowed the offense to create mismatches. With the field spread, speedy receiver James Proche was matched up on a linebacker, who he beat over the top for a 61-yard score.


SMU was much more explosive against TCU than Arkansas was and it wasn’t a fluke.

The Mustangs finished the regular season ranked eighth in the nation in scoring, 13th in total offense, 16th in passing offense and 44th in rushing offense. Arkansas was 62nd, 93rd, 83rd and 60th in those respective categories.

There is a massive difference in the quality of football played in the SEC and the American Athletic Conference, to be sure. But the talent Morris was working with across the board wasn’t equal to what he inherits in Fayetteville, either.

Sure, SMU had some playmakers, like preseason All-American receiver Courtland Sutton. But Sutton wasn’t some highly ranked recruit like say a Devwah Whaley or T.J. Hammonds. He was rated a 3-star prospect by ESPN, the No. 108 receiver in the nation and No. 216 player in Texas. His other best offers were from BYU, Colorado and Tulsa.

But he flourished under Morris at SMU, suggesting the new Arkansas coach excels at both talent evaluation and player development.

TCU limited Sutton to a single catch for no gain in the Sept. 16 matchup, but that didn’t slow the Mustang offense.

SMU came out of the gate making plays and did so for most of the game. Most of the season, actually.

That’s what Morris offenses do.