No TV or online viewing option for Troy game; how to listen, game information 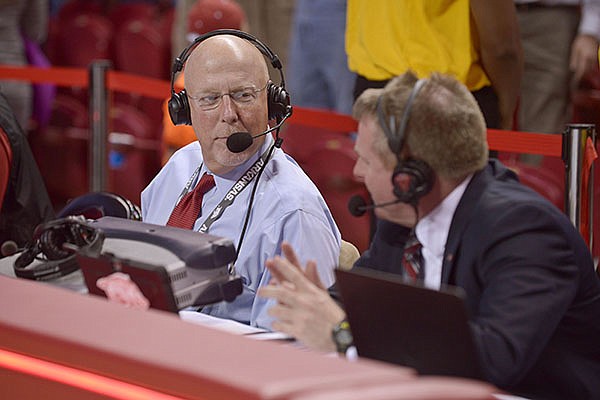 FAYETTEVILLE — There will be no telecast or streaming in any form of the Arkansas-Troy game on Saturday night in Verizon Arena.

It’s the only Arkansas game this season that won’t be televised or available on the Internet or through live streaming.

“It’s kind of like back in the days, man,” Razorbacks Coach Mike Anderson said. “If you don’t have a ticket, you can’t see it.”

The game was not selected to be televised by any of the SEC’s network partners, but because it falls within the SEC Network rights, it isn’t eligible to be broadcast by a third-party —such as Cox Sports Television — Arkansas Associate Athletic Director Kevin Trainor said in an email.

Arkansas spent $7 million before the SEC Network’s launch in August 2014 to provide television capabilities at all of its sports venues to a studio and control room built in Walton Arena, according to an athletic department budget report.

But Arkansas does not have the capability to independently produce a television broadcast from North Little Rock, Trainor said in his email.

Earlier this year, industry sources estimated an independent broadcast for an Arkansas baseball game at Dickey-Stephens Park in North Little Rock would cost more than $40,000.

RADIO: Razorback Sports Network can be accessed through local FM and AM affiliates, via the Arkansas Razorbacks Gameday app, via the TuneIn app or on ArkansasRazorbacks.com. The RSN broadcast will simulcast on satellite radio via Sirius Ch. 137 and XM Ch. 190.

NOTABLE: Arkansas is 9-9 all-time at Verizon Arena, including 4-2 in games coached by Mike Anderson ... The Razorbacks are undefeated when they have at least one dunk this season ... Arkansas freshman center Daniel Gafford went 8-for-8 in the Razorbacks' 95-79 win over Minnesota. Gafford is the reigning SEC freshman of the week after averaging 15 points, 6.5 rebounds and 4 blocks in games against Colorado State and Minnesota ... Troy senior guard Wesley Person Jr. is the son of former Auburn All-American Wesley Person ... Troy is scheduled to play four teams from the state of Arkansas this season. The Trojans defeated Arkansas-Pine Bluff 81-57 on Nov. 12, and are scheduled to host Sun Belt Conference foes Arkansas State and Arkansas-Little Rock in back-to-back games in February.