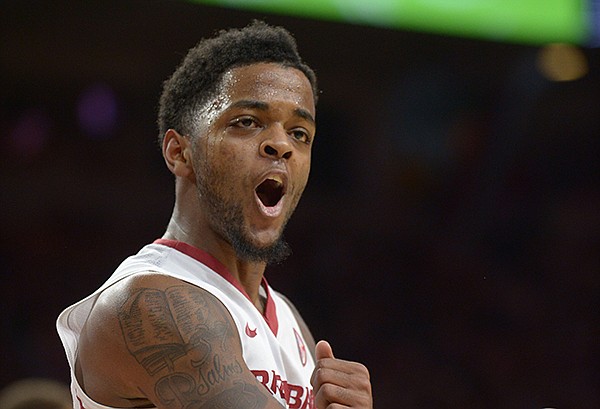 FAYETTEVILLE — While Arkansas’ basketball team may have started its post-Christmas slate a little sluggish, the Razorbacks came storming out of the intermission.

Arkansas went on an 18-2 run that started right before halftime and never looked back in a 95-68 win over Cal State University-Bakersfield Wednesday night before 11,327 fans at Bud Walton Arena.

The Roadrunners (7-8) had a 12-1 run to tie the game at 38-38 right before half, but the Razorbacks scored the final four points before intermission and 14 of the second half’s first 16 to put away the visitors.

“It was a good win,” Arkansas head coach Mike Anderson said. “I thought the second half was much better than the first half with our guys in terms of the rhythm of the game and in terms of how we were playing on defense.”

Arkansas (10-2), after aking off three days before Christmas and then returning to campus on Dec. 23, won its fifth straight game.

“I thought as a team we stepped it up,” Anderson said. “You expect coming off a break where you are going to have a little sluggishness, but at the end I thought we really turned it around in the second half.”

“I told them enjoy this until midnight because now we jump into the conference race where the championship is given to the conference champion,” Anderson said. “We have got to make sure we do our due diligence against a Tennessee Volunteers team that is playing awful well right now.”

Arkansas has been the first team out of the Associated Press Top 25 the last two weeks.

“They may be ranked, but they have to come to Bud Walton,” Thomas said. “That’s all. That’s all I have got to say.”

Barford was 8-of-12 from the field overall, 3-of-5 from 3-point range while not getting to the free throw line.

“Jaylen is a shot-maker,” Anderson said. “He can make shots, but I think a lot of shots also come from good ball movement. I think he is just catching and letting it fly. The time he has put in on it is paying off.”

“I think our defense just went to another level in the second half,” noted Macon, whose team forced 11 of the Roadrunners’ 17 turnovers after halftime.

Thomas felt the Razorbacks shook off the rust.

“I just think we played with a lot more energy in that second half,” Thomas said. “The first half we were kind of slow. We just picked it up.”

“In the first half, I thought the game was played like we wanted to play it - a little bit slower pace,” Barnes said. “I thought our guys did a really good job of defending.

“I thought in the second half their keys guys came to the game and we were not as good obviously on the defensive end. They have a talented group of guards and their big guys work extremely hard.”

Freshman guard Jarkel Joiner led the Roadrunners with 12 points - including five free throws off two technicals on Barford and Beard that were called during some woofing between the two teams.

“We gave them six or seven points with the technical fouls,” Anderson said. “That is something that will be addressed as well. Guys get to jawing with each other. There is no place for that, but it happens.”

It was the fifth straight game that Arkansas had less than 10 turnovers.

“I thought it would be more (turnovers) because it looked like there in the second half we had some uncharacteristic turnovers, but it just tells me that we continue to value the basketball,” Anderson said. “You would think we are a mature team, a good passing team. We’ll find out as we go against more and better defensive teams that are going to prepare for us.”