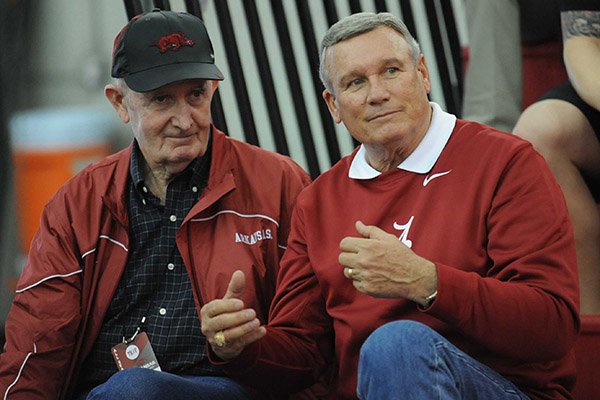 FAYETTEVILLE -- When bad things happen to good people, it seems even more horrific when those good people were about to spend more time together after retiring from what each did so well.

Dick Booth, in the words of retired Arkanas track coach John McDonnell, was the best jumps coach ever, "and has the trophies to prove it."

Booth proved it by coaching NCAA champions and Olympians in the field events, too numerous offhand to count, at Arkansas, Florida, Alabama and as head coach Louisiana-Lafayette.

Now Merry Lee has died, and Dick is hospitalized after surgery.

Covering track is uniquely informal for media members. A reporter often is right next to a coach as a key event unfolds with coaches' wives in the stands. Cover the sport thoroughly and you meet the whole family.

Merry Lee was first class, a view certainly shared by everybody I knew who knew her.

"I just liked her a lot," Ellen McDonnell said Tuesday. "Just always a nice, happy person. We had good times together."

They made their husbands' Hall of Fame great times coaching all the greater.

"She never stepped in the way of Dick's career or anything like that," John McDonnell said Tuesday. "She was a great teacher and all the while did it supporting Dick 100 percent. It was just tragic because they had retired and were making up for lost time because they had both worked really, really hard. They had just been up to New York for a week."

The Booths had retired to Colorado near their daughter, son-in-law and grandchildren.

Pat Storey of Fayetteville taught with Merry Lee at Asbell for many years.

"Just the epitome of a true lady," Storey said. "She had a style and grace about her and certainly dealt with her students in a gentle but firm manner. She was a classy lady. She had just posted on Facebook how excited that they were going on this snowmobile tour. And they had just bought a new house."

Arkansas Coach Chris Bucknam always talked at length with Dick and Merry Lee when Dick returned to Fayetteville with Florida and Alabama at the NCAA and SEC Indoor meets here.

"I'm heartbroken," Bucknam said. "Merry Lee would see my daughter and always give her a big hug. They just exuded class."

Travis Geopfert looked up to and corresponded with Booth as a young field events coach at Northern Iowa. He succeeded Booth in 2010, and has continued ongoing correspondence.

Geopfert said he was awed by Booth's Arkansas legacy when he arrived in Fayetteville, but he became even more awed by the happy 52-year Dick Booth-Merry Lee Booth marriage.

"Their marriage is what a marriage should be like," Geopfert said. "A great example for us younger coaches and all the rest of us to learn from and hopefully emulate."