5 Observations from Missouri's 83-78 win over Arkansas 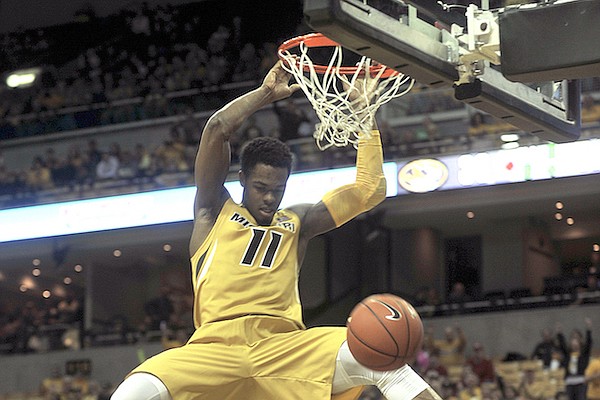 Missouri's K.J. Walton dunks the ball during the first half of an NCAA college basketball game against Arkansas Saturday Feb. 4, 2017, in Columbia, Mo. (Don Shrubshell/Columbia Daily Tribune via AP)

FAYETTEVILLE — Five observations, with video, from Arkansas' 83-78 loss at Missouri on Saturday.

This is the worst defensive team Mike Anderson has had in his 15 years as a head coach.

The numbers back it up. Arkansas allows 103.4 points per 100 possessions. None of his other teams had defensive ratings that cracked triple digits.

This was his worst defense before Saturday’s loss. Saturday was just the latest and most blatant example of the Hogs’ issues on that side of the court.

Missouri topped 80 points for the first time in SEC play after entering the game averaging a conference-worst 66.2 points against league foes.

The Tigers averaged a putrid 91.7 points per 100 possessions in conference play coming in. They shot 61.5 percent and posted a gaudy 142.4 offensive rating in the first half and wound up with a 122.1 for the game, just the third time they’ve cracked triple digits in conference play. Yikes.

Missouri hit some tough shots, sure. The Tigers had a number of contested makes they haven’t gotten to drop most of the year, part of the reason they shot 50.9 percent after entering the game shooting 38.1 against SEC foes.

But the Tigers also benefitted from an all-around shoddy effort by Arkansas. The Razorbacks were lackadaisical on that end of the court at times.


Macon gets beat off the dribble and fails to close out with a sense of urgency in the corner when Jaylen Barford rotates to pick up Macon's man. The Tigers get the best shot in basketball as a result.

Macon had a rough night. Here, he gets caught up in a screen and is late to contest.


Arkansas' guards have struggled to hang with opponents off the dribble most of the year, which puts the rest of the defense in compromising situations.


As has been the case all year, Arkansas’ pressure — both full-court and its trapping in the halfcourt — turns into a negative if it isn’t forcing turnovers. Missouri took care of the ball, turning it over just 10 times, which provided it power-play situations against a scrambling Arkansas defense.


The Tigers, unlike Alabama, handle the trap and get a wide-open jumper as a result.


Nice split of the Hogs' hedge leads to a wide-open corner 3 when the rest of the defense has to help.

The fouls add up. League opponents have a 50.5 percent free throw rate against Arkansas, the highest mark in the conference.

The pressure has had its moments, notably Wednesday when 18 Alabama turnovers led to 29 Arkansas points. But that was more the exception than the rule.

Arkansas’ defense forces turnovers just 17.3 percent of the time in SEC play, which ranks 10th in the conference, a precarious place to be for a program built on an identity of pressuring opponents. Missouri had a 14.7 turnover rate Saturday.

Of course, pressure defense isn’t simply about forcing turnovers. The pressure can take its toll on opposing offenses as the game wears on. It did at Vanderbilt in the Hogs’ frantic comeback. Missouri reverted to missing some shots it usually misses and had a few turnovers in the second half, but handled the press well overall.

Saturday, Arkansas’ pressure was a net negative. Add in lax halfcourt defense and you have a recipe for a defensive disaster.

— Barford putting Hogs on his back

Jaylen Barford has arrived as a big-time scorer. Perhaps it took longer than expected for the nation’s No. 1 JUCO recruit, but he’s here, averaging 17.2 points his last five games.

That stretch includes a 21-point effort that made him a bright spot in the loss at Oklahoma State last Saturday. He topped that by scoring a new career-high 23 points at Missouri.

He missed all 3 of his 3-pointers, but was 8 of 13 otherwise and hit 7 of 8 3-pointers. He had a number of acrobatic, contested finishes that were impressive.


Nothing new here. Barford’s been doing this all year.

He had 2 steals that led to easy baskets.


Barford is a gifted scorer with the ability to create for himself. His increasingly aggressive mindset the last few weeks has been a positive.

Barford’s 2 steals produced 4 of Arkansas’ 15 points off Missouri turnovers. The Hogs scored half their points off turnovers, second-chance points and fast-break points.

Barford’s other makes shown above showcased Arkansas’ ongoing issue on offense. The Razorbacks have struggled to generate easy baskets in their halfcourt offense.

Arkansas had zero assists in the game’s first 10 minutes as it fell behind by 15 and dug itself a hole that was grueling to get out of. The Hogs finished with just 11 on 26 made baskets, the third time in four games more than half of their baskets have been unassisted.

Barford and Daryl Macon combined for 38 points. Of their 12 made shots, just 2 were assisted. It’s an interesting give-and-take issue. Arkansas has a good offense (No. 3 in SEC play with a 111.2 rating) in large part because of the one-on-one skills of Barford, Macon and Dusty Hannahs. They’re all gifted scorers who can create their own shots.

But that reliance on isolation scoring has taken its toll at times, especially recently. It can lead to highlight-reel plays and it can lead to ugly sequences of forced shots.

Arkansas’ offense wasn’t bad Saturday. It wasn’t the reason it lost. The Razorbacks shot 51 percent and posted a 113 rating even with a meh 19 of 27 showing at the line. But there is merit to the idea that the stress of creating offense out of thin air takes a toll on players. Case in point: Barford and Macon combined to turn the ball over 3 times in the final 1:15.

Moses Kingsley had to sit for the final 8:29 of the first half after picking up his second foul when he was hit for a technical after shoving a Missouri player.

Mike Anderson stuck with him when he picked up his third foul less than a minute into the second half. But whether it was the foul trouble or something else, Kingsley was as ineffective as he has been so far in an at-times frustrating senior season.

He finished with a season-low 4 points on 1 of 3 shooting, adding just 2 rebounds and 1 block in 23 minutes. Arkansas needs more from its most important player.

Kingsley’s offense has been iffy most of the year. The 4 points are more a result of lack of opportunity than anything else. He only had 1 possession end in a post-up.

But even when he had a chance to score, he passed it up.


He’s been blocked in the paint a few times recently, which may have caused him to dribble out and pass rather than take it up strong.

Kingsley’s defense and rebounding are much more important than his offense and have been consistent most of the year. Both were lacking Saturday. He had an early, emphatic block but otherwise failed to offer much rim protection.

Arkansas won the rebounding battle 33-26, but Kingsley did little to contribute to that. This failure to secure a defensive board proved crucial.


That’s a game-altering play and a rebound Kingsley grabs more often than not. He didn’t Saturday.

Anderson closed the game by playing small-ball for the final 6 minutes, with Manny Watkins operating as the nominal 4 for much of the time.

It’s not the first time Anderson has gone to a four-guard lineup. He did the same down the stretch at Vanderbilt and the Hogs won the game by blitzing the Commodores with the lineup.

The small-ball lineup was -2 down the stretch and -5 in 11:54 for the entire game. Not great, but it has been a decent look for the Hogs at times this year.

Saturday marked the most Anderson has used the four-guard look this season, a result of the matchup (he used it 7 minutes in the first meeting) but also a testament to the Razorbacks’ ongoing lack of consistency from its 4s.

For the second straight game, none of the Hogs’ 4s played 15 minutes. Dustin Thomas, Arlando Cook and Adrio Bailey combined for 8 points (on 3 of 6 field goals and 2 of 5 free throws), 12 rebounds, 0 assists and 4 turnovers in 28 minutes.

Thomas grabbed 6 boards and has been better on the glass of late. Cook had 4 offensive rebounds in 10 minutes, but negated some of that by struggling to finish around the basket. Bailey had a rebound in 4 minutes, but committed a bad foul in the backcourt and got beat for an offensive rebound.

As a whole, the group’s rebounding numbers are solid, but they brought little else to the game. Opposing defenses have taken note of their lack of offense lately, largely ignoring them, which serves to shrink the floor for the Hogs’ guards.

Watkins played well, scoring 9 points, grabbing 6 rebounds, dishing 2 assists, coming up with a steal and avoiding any turnovers in 22 minutes. He even hit another 3.

Playing him at the 4 opens up driving lanes for Arkansas’ guards, which is crucial. Anderson won’t be able to go small against every opponent, but it may be the best alternative when possible given the lack of production from the rest of the 4s.

— Arkansas has struggled to free Dusty Hannahs for 3s in the halfcourt. His 2 makes Saturday came in semi-transition and off an offensive rebound.

— Hogs probably have to win 7 of their final 8 or go on a run in the SEC Tournament to get into the NCAA Tournament. A harsh reality given that they just secured their best start in 19 years Wednesday.