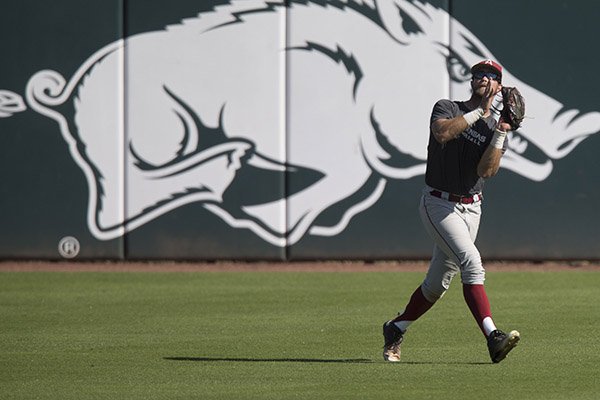 FAYETTEVILLE — Junior outfielder Luke Bonfield has battled a leg injury off and on since last year, but Arkansas coach Dave Van Horn said he doesn't expect him to miss any playing time because of it.

"He ran down a couple of balls (Sunday) and just missed another one," Van Horn said Monday after speaking to the Swatter's Club at Hilton Garden Inn. "He said he feels as good as he has felt in a long time.

"Luke really gets good reads on the ball. He's not real smooth out there, but he gets the job done."

Bonfield also had two home runs, including a grand slam, during Sunday's scrimmage and finished with 7 RBI. Van Horn indicated that was a result of the leg feeling better.

"When his legs are underneath him, he's as good a hitter as there is in our league," said Van Horn, who noted Bonfield may also start some as a designated hitter.

Bonfield had a .304 batting average last season, led the team with 39 RBI and was tied for the team lead with 8 home runs.

The New Jersey native is back with the Razorbacks despite being a draft-eligible sophomore last summer. Baseball America ranked him one of the 100 best draft prospects in 2014, but he fell to the New York Mets in the 21st round that year because of a high asking price to skip college. He went undrafted last year after indicating he wanted to return to college.

"The coaches have been so good to me while I've been here that I didn't want to leave them and my teammates after the type of season we had (in 2016)," Bonfield said in October. "I felt like it was almost my duty to come back."