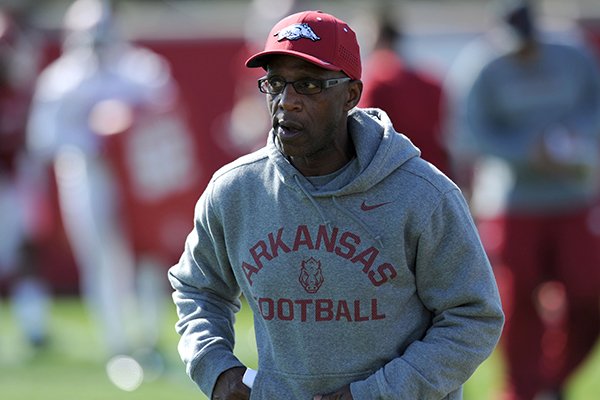 Arkansas assistant coach Reggie Mitchell speaks to his players Tuesday, March 29, 2016, during practice at the university's practice field on campus in Fayetteville.

Perkins, 6-4, 250 pounds has 21 scholarship offers from schools like Missouri, Arkansas, Texas, Texas A&M, Iowa, Oregon and Wisconsin. He said the ‘Being Bret Bielema’ show has played a part in his interest in the Hogs. He spoke about his relaltionship with running backs coach Reggie Mitchell.

He had 47 tackles, 3 sacks, a recovered fumble and recorded 21 receptions for 353 yards and 7 touchdowns at tight end as a junior. As a sophomore, he made 85 tackles and 9 sacks along with 18 receptions for 248 yards and 8 touchdowns.