What we learned in Arkansas' win at No. 21 South Carolina 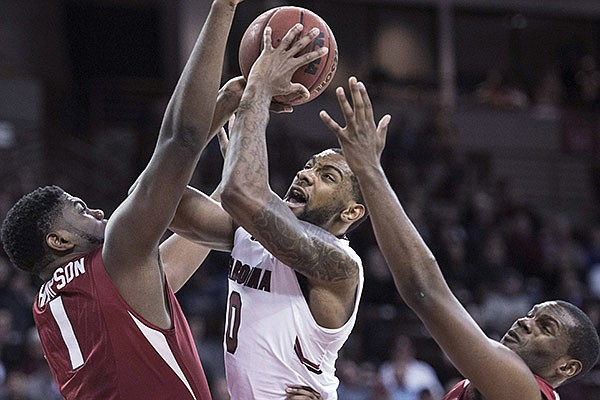 Moses Kingsley was the player of the game

The SEC Preseason Player of the Year played like it Wednesday, finishing with 16 points, 7 rebounds and 4 blocks in the Razorbacks’ 83-76 win at South Carolina.

He made a sizable impact on the game with his scoring, his work on the glass and his rim protection.

The 6-foot-10 senior has struggled to assert himself as a low-post offensive presence for much of the year, but made 4 of 5 shots on post-ups against the Gamecocks, including a key, contested bucket from the left block to put the Hogs up 77-74 with 1:51 remaining. He finished 5 of 9 from the floor and scored at least 16 points for just the third time in 13 SEC games.

His team-high 7 boards helped steady Arkansas on the glass after South Carolina grabbed nine of the game’s first 10 rebounds. The Razorbacks wound up outrebounding South Carolina 31-30.

And his 4 blocks were vital. The biggest came with 19 seconds left and Arkansas protecting a 79-76 lead. The Razorbacks got the stop and the win. The game marked the eighth time this year, second straight, that the SEC’s leading shot blocker has recorded at least four rejections.

Arkansas has its quality win

Prior to Wednesday, the primary argument against the Razorbacks' NCAA Tournament résumé was that Arkansas didn't have a win over upper-tier competition.

According to the NCAA's updated Ratings Performance Index (RPI) standings, the Razorbacks' best win had been against Texas-Arlington, ranked No. 41. Arkansas was 0-4 against teams - Florida, Kentucky, Minnesota and Oklahoma State - ranked higher than UT-Arlington in the RPI.

But South Carolina entered the game ranked No. 21 in the NCAA's RPI. The Gamecocks (20-6, 10-3 SEC) also were tied for first-place in the conference standings entering the week.

By any measure a win over South Carolina should be considered a quality one. It has added significance coming at Colonial Life Arena, where the Gamecocks were 13-2 this season.

Arkansas now is 5-4 in road games this season, including 5-2 in SEC road games with all five wins coming when the team trailed by at least 12 points.

Road wins are worth nearly twice as many points as a home win to a team's RPI. Coupled with the boost in strength of schedule that comes from playing South Carolina, Wednesday's win should significantly improve Arkansas' No. 48 ranking in the RPI.

South Carolina’s Sindarius Thornwell came into Wednesday on a tear. The senior guard averaged 36 points per game last week, demonstratively adding to his SEC Player of the Year candidacy.

Thornwell scored a game-high 27 points, but Dusty Hannahs and Jaylen Barford nearly matched him with big nights of their own, combining to score 43 and step up in critical junctures throughout the game.

Barford matched his career-high with 23 points, including 17 in another first-half eruption as the Hogs used a 25-2 run to take a 39-32 halftime lead.

Hannahs had 12 of his 20 points in the second half, scoring 9 of them in a span of less than 2 minutes midway through the half. Arkansas led 55-54 when he checked into the game. The Hogs were up 64-57 after his solo run.

Arkansas doesn’t lack for guard firepower. Hannahs and Barford proved that in a matchup with one of the SEC’s top players Wednesday.

Hogs have a comeback recipe

Arkansas has this comeback thing down, so it should come as no surprise the Razorbacks knew what to do when they fell behind by 14 points early in the game.

Like last Saturday's 78-70 win at LSU, Arkansas switched to a zone defense when it trailed by double digits. The Razorbacks stifled South Carolina and turned the Gamecocks' misses into transition threes on the other end.

Arkansas' 25-2 first-half run against the Gamecocks included five made 3-pointers - two each by Dusty Hannahs and Jaylen Barford, and one by Daryl Macon.