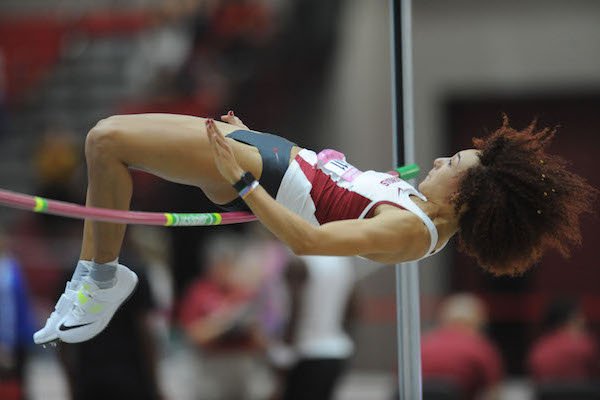 FAYETTEVILLE -- It's been three years since the Arkansas Razorbacks women's cross country and track and field teams went to an SEC meet and didn't win the championship.

Coach Lance Harter hopes his Razorbacks can make it nine in a row when they compete at the SEC indoor meet today and Saturday in Nashville, Tenn.

"We've been on kind [of] a roll that just verifies we're not going to be very popular at the SEC meet," Harter said. "We've got a target on our back."

Arkansas, ranked No. 2 nationally, is among eight SEC teams in the top 25 poll, including No. 3 University of Georgia, No. 4 Louisiana State University and No. 6 University of Kentucky.

"We could end up being second or third at the meet this year," Harter said. 'This might be LSU's best team that I've ever seen them put together. This is the best team by far Georgia's ever had."

Arkansas will be led by sophomore pole vaulters Lexi and Tori Weeks, twin sisters from Cabot who rank 1-2 nationally. Desiree Freier is fifth nationally in the pole vault.

Taliyah Brooks will compete in the pentathlon along with Leigha Brown, Kelsey Herman and Ashlee Moore. Brooks, the NCAA runner-up in the event last year, also will go in the long jump and high jump.

Taylor Werner and Regan Ward will double in the 3,000 and 5,000 meters and Nikki Hiltz will run the mile and on the distance medley relay.

Harter said he expects Arkansas to compete for points in every event except for the throws and the 60 and 200.

"I think we have a very good team, but by no means is it the best we've ever put together," Harter said. "But I think we're more than capable of answering the challenge."

Harter said the Razorbacks being counted on for points at an SEC meet for the first time have to understand the level of competition and the importance Arkansas places on extending its title streak.

"The young ones need to figure out it's a priority and one point here or there can make a critical difference," he said. "They just figure, 'When you wear an Arkansas jersey, it's automatic that you're going to win.' It's certainly not automatic.

"I've drafted the points many, many times in my head and on paper, and it's a lot closer than I think people anticipate."

Harter said the Razorbacks should score well in the distance races but won't dominate as they have in previous years. He said other SEC teams have made signing top distance runners a priority to weaken Arkansas' chances of winning the meet.

"People have labeled the SEC as a sprints, jumps, hurdles type of conference," he said. "But now the distance races can match up with anybody in the United States."