Hogs smooth over bumps with surge 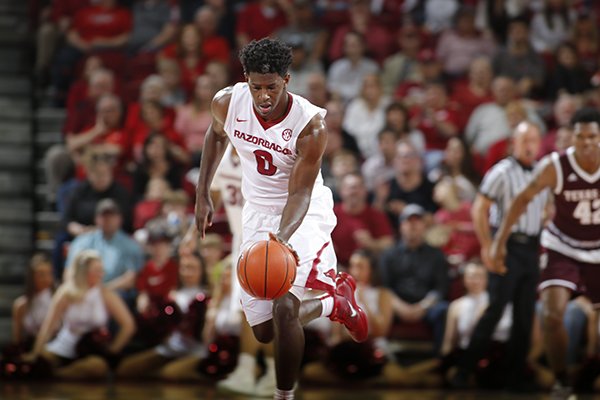 FAYETTEVILLE -- When the Arkansas Razorbacks trailed at Louisiana State University by 14 points in the first half two weeks ago, they appeared headed for their third consecutive loss and fourth in five games.

Instead, the University of Arkansas at Fayetteville basketball team rallied to win 78-70 to start what has become a four-game winning streak.

The Razorbacks (21-7, 10-5 SEC) will try to make it five in a row when they play Auburn University (17-11, 6-9) at Auburn Arena on Saturday night as they continue their drive for an NCAA Tournament bid.

Anderson said the Razorbacks' 16-4 start -- before they lost at Oklahoma State University and at the University of Missouri and to Vanderbilt University at home -- wasn't a fluke.

"We just had to get back on track and play with that sense of urgency that you have to play with," he said. "There is a saying, 'A pat on the back can set you back.'

"I think the pats on the back kind of set us back, and we started believing some of that stuff. You have to go out and earn it each and every day."

"Obviously, they're hitting their stride at the right time of the year," South Carolina Coach Frank Martin said. "Mike's done a great, great job continuing to coach that team, and he's got them in a great, great place right now."

Junior guard Jaylen Barford led the Razorbacks with 16 points against Texas A&M, including six in a row as part of an 8-2 run to put them ahead 77-69 with 2:26 left.

Martin said the 1-3 stretch that dropped the Razorbacks to 17-7 shouldn't have been viewed as making them a bad team.

"Every team struggles," Martin said. "We all have a rough patch. It's part of a long season.

"They're a real good basketball team. The numbers show that. Maybe they didn't play as well as they needed to for a game or two, but they're playing well right now. That's a credit to Mike, his staff and those kids."

"We played well in that game, but I thought Arkansas was ready and stayed the course," LSU Coach Johnny Jones said. "They had different guys show the ability to step up and make plays for them.

"That's continued for them, especially with some of the new faces they've got to go along with the more experienced guys. I think chemistry is always important, and it seems as though their team is continuing to jell and trust and believe in the system that Mike has there."

"They just throw guys at you," Texas A&M Coach Billy Kennedy said. "They're older. They know how to fight through fatigue.

"You can see their experience and their depth was a big advantage, especially the second half."

The nine Razorbacks who have played in every game are juniors or seniors, but four are transfer newcomers with Barford, Macon, and forwards Dustin Thomas and Arlando Cook.

"I think guys are just locking into their roles and bringing what they bring to the table," Thompson said. "We're locking in, and Coach is making sure we're focused and not worried about anything else but the next practice and the next game."

Anderson said the Razorbacks are showing improved leadership and taking ownership of the team and the season as the newcomers have become more comfortable.

"Early on, they were trying to do the same things they were doing before they got here," Anderson said. "When you come into this setting, obviously, the roles change from a standpoint of you have to play offense and you have to play defense.

"You're going to earn your playing time out there. Whether you start or not, just go out and give everything to the team."

Anderson has a 323-169 record in his 15th season as a head coach. He's never finished a season with a losing record.

"With all the teams I've had, it takes time," Anderson said. "You're going to have some bumps along the way.

"If you can get through those, I think that little adversity, it can create the kind of team you're going to be. We're a team that prides ourselves on playing hard, tenacious, just getting after it. Playing together, sharing the basketball.

"We have some guys that have been through the wars that should be leading these guys. I think some of those things are starting to fall in place."