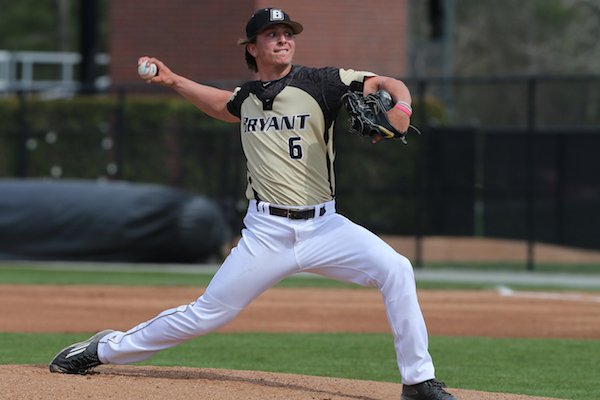 FAYETTEVILLE — The Arkansas Razorbacks won’t have to wait for the SEC season in three weeks to see a big arm.

The Bryant University Bulldogs make their first trip to Baum Stadium today with the reigning national pitcher of the week in tow. Junior right-hander James Karinchak struck out 12 and allowed 2 hits in 5 innings in a victory over New Mexico State on Feb. 16.

He was named pitcher of the week by Collegiate Baseball Newspaper.

Karinchak (6-3, 230 pounds) has a fastball that touches the mid-90s, and he also throws a curveball and a change-up that has been difficult on left-handed hitters. His pitch count will be around 80 for today’s game, Bryant Coach Steve Owens said.

“He’s a power-type arm,” Owens said. “He’s aggressive, he’s got a very good fastball and a really good breaking pitch. He never gives in, and he keeps fighting until the end.

“He’s just a good pitcher and he’s prepared. He won’t be able to go long because he’s not built up like he would be in the middle and the end of the year, but he’s been very consistent with what he’s given us. He was great last week. He was throwing hard with good command.”

Baseball America rates Karinchak as one of the top 70 draft-eligible college prospects this year, and he was named second-team All-American last year by Louisville Slugger.

University of Arkansas at Fayetteville Coach Dave Van Horn said he was impressed with the film he saw of Karinchak’s first outing last week. Van Horn referenced a specific instance in which Karinchak had allowed runners on second and third with one out but escaped the inning without allowing a run.

“That’s what the good ones do,” Van Horn said. “They may create a jam or give up a couple hits every now and then or walk somebody, but when they get runners in scoring position, they find a way to get out of it and keep their team in the game. That’s what he does.”

As a sophomore, Karinchak set school records with 12 victories and 112 strikeouts in 15 appearances. Arkansas outfielder Luke Bonfield said Karinchak’s delivery is similar to Zach Jackson, the Razorbacks’ reliever who was drafted by the Toronto Blue Jays in the third round last year.

Bryant (2-2) is expected to present Arkansas with a better challenge than the Razorbacks faced in their season-opening sweep of Miami (Ohio) University last weekend. Bryant had the NCAA’s highest win percentage during the regular season a year ago, and the Bulldogs have won at least 42 games in three of the past four seasons.

Bryant joined the NCAA’s highest classification 10 years ago and has made the NCAA postseason all but once since it has been eligible. The Bulldogs’ first postseason game was against Arkansas at the Kansas State regional in 2013, a game Bryant won 4-1.

“They have a real good program,” Van Horn said. “They’ve been solid for many years now. Their coach has been doing it for a while, and he knows what he’s doing. They know what it takes to win nationally, but they know what it takes to win that league and that tournament and get to those regionals. It’s a team that’s been there and done that, so I don’t feel like when they come into ballparks like this they’re intimidated.”

The Bulldogs lost several players from the team that went 47-12 a year ago, but Owens said some pieces still are in place. In addition to Karinchak, Bryant returns Saturday starting pitcher Steve Theetge and three position players.

“We’re hoping to be able to continue to win while we’re young, but we realize that’s a process,” Owens said. “We have potentially five, and as many as seven freshmen, on the field at any given time.”

Bryant was picked by league coaches in the preseason to win the Northeast Conference for the fourth time in five seasons. The Bulldogs haven’t advanced past the opening weekend of the NCAA Tournament, however, which Owens said led him to schedule a trip like the one this weekend.

The trip to Arkansas is the first to an SEC stadium for Bryant, which also has series scheduled at Auburn University next season and Louisiana State University in 2019.

“Our goal is to advance out of a regional,” Owens said. “To do that, we have to play elite programs and see elite pitching, and see speed and power.