Razorbacks counting on depth as edge against conference's best 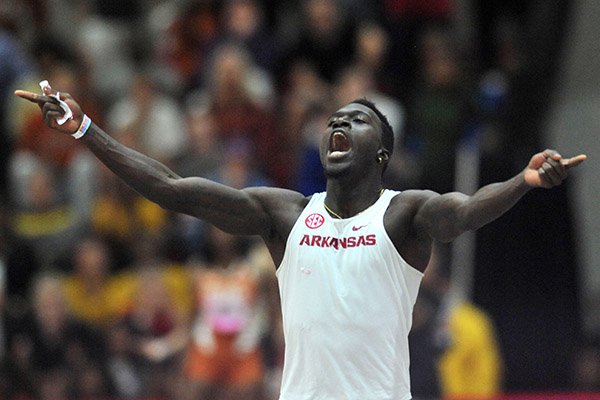 FAYETTEVILLE -- The SEC Indoor Track and Field Championships are being held in Nashville, Tenn., for the first time but the Arkansas Razorbacks' men's team hopes the meet has a familiar result.

The Razorbacks will be going for their 22nd SEC indoor title in 26 tries since joining the conference for the 1992 season when they compete today and Saturday at Vanderbilt University's facility.

John McDonnell's University of Arkansas at Fayetteville teams won 15 of 17 SEC indoor titles between 1992 and his retirement after the 2008 season.

McDonnell said this week he's proud of how his successor as coach, Chris Bucknam, has continued the winning tradition with six SEC indoor titles in eight years.

"We always make winning the SEC title our No. 1 priority like Coach Mac did," Bucknam said. "That's never going to change."

"We're a true team," he said. "We can come in score in a lot of events. We're not one-dimensional.

"It's all hands on deck and hopefully we can get through this meet with a victory and come out unscathed."

The No. 2 Razorbacks are among eight SEC teams ranked in the top 12 nationally, including No. 1 University of Florida, No. 4 University of Georgia, No. 5 Texas A&M University and No. 8 Louisiana State University.

"I see Florida and Texas A&M and us vying for the championship just by what's on paper," Bucknam said. "But the conference is deeper than I can ever remember since I've been here.

"Ole Miss is making noise and the same with Georgia. You've got LSU in the mix.

"It's a meat grinder and every year this meet gets harder and harder to win."