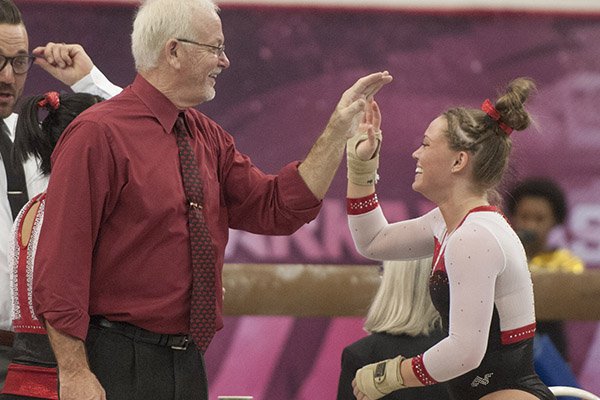 FAYETTEVILLE -- The No. 21 University of Arkansas at Fayetteville gymnastics team faces its first opponent outside of the top 16 t̶o̶d̶a̶y̶ Saturday,* but the Razorbacks will take on struggling Michigan State University on the road with another injury concern.

Sophomore Sydney McGlone is questionable with an undisclosed injury for the Razorbacks (2-5), who take on the Spartans (2-6) today at 1 p.m. at Jenison Field House in Lansing, Mich.

Arkansas faces its first opponent out of the top 16 after competing against No. 4 UCLA, No. 6 Missouri, No. 16 Georgia, No. 5 Alabama, No. 17 Auburn, No. 2 LSU and No. 3 Florida during the first seven weeks. … The meet is the Spartans’ annual breast cancer awareness competition, with fans encouraged to wear pink. … Michigan State Coach Mike Rowe was a professional dancer from 1985-97 in New York City, and on national and international tours.

McGlone took a hard tumble a couple of weeks ago in vault practice, and although she's passed an MRI exam, she's still feeling effects from the fall.

"She's still suffering a little bit from that, and we're not sure if she's going to be competing, so that's a little blow to us," Arkansas Coach Mark Cook said.

Heather Elswick, who has been recovering from wrist surgery, might get her first run on the vault today. Cook said he might put only five gymnasts -- Elswick, fellow senior Samantha Nelson, freshman Jessica Yamzon, junior Mia Bargiacchi and sophomore Makenzie Anderson -- up on the floor exercise if McGlone, who has captured two event titles this year, is unable to go.

The Spartans have had woes on a different level the last couple of weeks. Coach Kathie Klages, who had been at the school for 27 years, resigned Feb. 14, the day after she was suspended by Michigan State. The suspension followed allegations that she downplayed concerns from athletes regarding medical treatment from team doctor Larry Nassar, who is the subject of numerous civil and criminal complaints from former female patients who are alleging sexual abuse.

Michigan State has lost five consecutive dual meets and has broken 195 only once. The Spartans scored 194.025 in a loss at the University of Illinois last week, their first meet under interim Coach Mike Rowe.

The Razorbacks jumped two spots in the first set of rankings that featured regional qualifying scores this week. Arkansas' score is 195.535 and Michigan State's score is 194.18.

Cook said he doesn't anticipate a lack of focus with his team out of the SEC grind for a week.

"A lot of times we don't really respond to another program being stronger or weaker," Cook said. "You just have to go up there and do your job. It does give us an opportunity to notch another win for our season."