Updates from Game 1 of Arkansas-Bryant 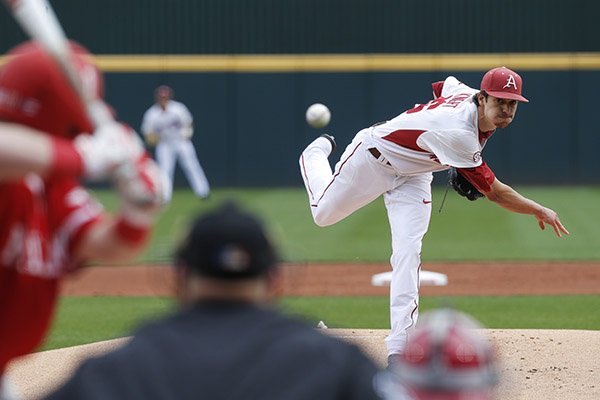 Arkansas pitcher Blaine Knight throws a pitch during a game against Miami (Ohio) on Friday, Feb. 17, 2017, in Fayetteville.

Cody Scroggins loaded the bases in the top of the ninth, but Josh Alberius came on and induced a double play on his first pitch and closed it out.

Grant Koch slammed his second home run of the season to lead off the bottom of the eighth. He has a triple, a homer and 4 RBIs today.

Tyler Panno slammed a two-run homer and Bryant got its best hitter Nick Angelina to the plate as the tying run, but Chadwick got out of the inning by whiffing him.

Bryant got a couple back in the top of the seventh on Mickey Gasper's two-run single.

Arkansas finally got to Karinchak in the sixth when Evan Lee doubled on the first pitch, Luke Bonfield walked and Grant Koch tripled off the fence to chase the starter and cut it to 3-2.

Carson Shaddy tied it 3-3 with an RBI single and the Razorbacks went on to score 7 more runs on a variety of bases loaded walk, hit batter, wild pitches and Dominic Fletcher hit a sacrifice fly.

Chris Wright's solo one-out homer pushes Bryant ahead 3-0 in the top of the fourth.

Bryant breaks up a scoreless game and goes up 1-0 when Jacob Marotta doubles with two outs, Cole Fabio walks and Ryan Ward bloops a single to center that CF Dominic Fletcher mistakenly broke back on first.

Nick Angelina made it 2-0 when he roped a single to right that scored Fabio.

Dominic Taccolini got up in the bullpen for the Razorbacks, but Knight got out of the frame without any damage.b]End of First Inning[/b]

Both pitchers - Arkansas starter Blaine Knight and Bryant preseason All-American James Karinchak - breezed through the first with just one baserunner. That was Razorback leadoff man Eric Cole, who was stranded at second after stealing a base.

Knight fanned his first two batters of the inning before hitting Chris Wright. But he quickly picked him off.

Karinchuk fanned a pair around a fly out to center.

Both pitchers - Arkansas starter Blaine Knight and Bryant preseason All-American James Karinchak - breezed through the first with just one baserunner. That was Razorback leadoff man Eric Cole, who was stranded at second after stealing a base.