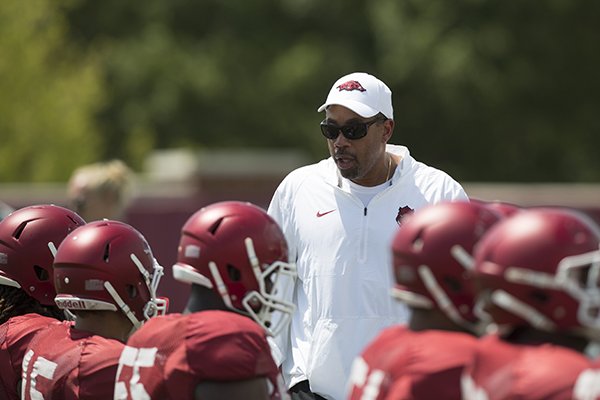 A good relationship between a prospect and his lead recruiter is a must if a school has a chance to sign the prospect.

Defensive end Dante Lang said Arkansas Razorbacks inside linebackers coach Vernon Hargreaves is more like a friend than a coach.

"That's my guy right there," Lang said. "He's cool. I can talk to him every time I want. He's just a cool dude. I can look to him not just as a coach, but a human being. Most people when they see coaches they like freak out, but I can look at him as a person."

Lang, 6-5, 230 pounds of Boca Raton, Fla., has scholarship offers from the University of Arkansas at Fayetteville, Kentucky, Vanderbilt, Florida Atlantic and UNC-Charlotte. A good relationship with his recruiter is a high priority.

"It's probably one of the more important things because I want to be able to be somewhere I'm comfortable," Lang said. "I don't want to go to a place where I don't know anybody and I'm not cool with the coaches."

He said the likelihood of a visit to Arkansas is very good.

"Really high. I'm trying to take a visit during the spring, like for a spring practice," Lang said.

Lang recorded 68 tackles, 18 tackles for a loss, 16 sacks, a forced fumble and 2 recovered fumbles along with an interception return for a touchdown as a junior. In limited action at tight end, Lang had two touchdown receptions

Lang, who believes Central Florida and Miami are close to offering, is expected to be a bigger target on offense in the fall. He said there's a good reason why he doesn't wear gloves.

"When I was a kid, I tried to wear them because I used to play receiver, and then I switched to D-line," said Lang, who has a 3.4 grade-point average and is considering sports medicine or mechanical engineering as a major. "The only reason I stopped wearing them was because they use to make them with holes so when I ran it tickled my hands, and I couldn't catch the ball."

Davis said Lang demonstrated freakish athleticism when returning the interception for a touchdown.

"I watched him at the defensive end spot do one of those J.J. Watt pick-sixes," Davis said. "He jumped up and mauled the ball in the air."

Lang, whose father is 6-7, has the frame to add more weight.

"His body could put on anther 20 pounds easy, and he'll probably grow some more," Davis said.

Running back Keaontay Ingram is one of the hottest prospect in the nation at his position as he continues to add scholarship offers.

Ingram, 6-0, 190 pounds of Carthage, Texas, has more than 20 scholarship offers and mostly recently added one from Oregon to go along with ones from Arkansas, Texas, Michigan, Texas A&M, Ole Miss and UCLA.

He said he never thought he would have so many offers.

"It's a fun experience. It's a childhood dream," Ingram said. "Not everybody gets to experience this, and I'm enjoying every bit of it."

Ingram is being recruited by offensive line coach Kurt Anderson.

"It's never a dull moment," Ingram said. "We talk about what they run. That's one of the schools that if you play running back, you want to go to."

He was expected to visit Texas on Saturday. Despite his size, Ingram said he plays center for his high school basketball team and is very physical.

"If I don't foul out the game every game, I almost foul out," Ingram said.