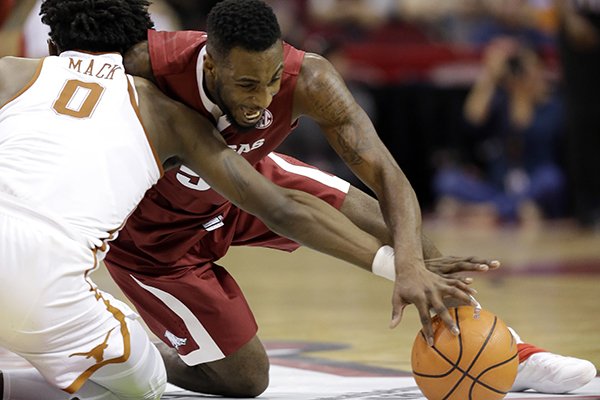 Let that sink in for a minute.

Arkansas went 14-66 from the 2001-2002 through 2010 seasons -- Nolan Richardson's last season as coach followed by five seasons under Stan Heath and four under John Pelphrey -- and the SEC road struggles continued in Mike Anderson's first two seasons with records of 1-7 and 1-8.

That was Arkansas' first winning SEC road record since going 5-3 during the 1994-1995 season with five starters back from the 1994 national championship team.

Anderson said the players deserve credit for understanding what it takes to win on the road in conference play.

"I've finally got guys here who embody what I'm all about," Anderson said. "You've got to have a mindset.

"Everybody plays at a certain level at home, and you've got to match that intensity and hang around to give yourself a chance."

Arkansas fell behind at Tennessee 39-26, but closed the first half and opened the second half by outscoring the Vols 24-4 to take a 50-43 lead.

Tennessee pulled within one point three times in the second half, but Arkansas held on by hitting 11 of 12 free throws in the final 1:31.

"To win on the road, you just have to stay together as a team," Barford said. "Just play for each other."

The Razorbacks, who beat Texas 77-74 in Houston, have improved their play away from home since losing at Minnesota 85-71 on Nov. 22 in the first road game for seven Arkansas newcomers.

Anderson said it was "glaring" at Minnesota that the Razorbacks played as individuals rather than a team.

"We had guys trying to make seven-point plays, guys spinning, turning it over, making passes at the last minute," he said.

Anderson said when the Razorbacks came back at Tennessee he saw teammates who trusted each other.

Anderson said that after a slow start against the Vols, the Razorbacks did the "little things" that lead to road victories.

"I just saw a lot of similarities of teams that have really played well for me," he said. "I'm talking about defensively, trusting one another, helping one another. Rotating on time, guards in there rebounding the basketball, coming up with loose balls.

"Then on offense, the floor was spread, ball was moving, cutting. We didn't clog it up. Things were flowing.

"Hopefully, it's something that we've learned and we can carry it on to the next game."

The Wildcats beat Texas A&M 100-58 Tuesday night to improve their record in Rupp Arena to 126-5 in John Calipari's eight seasons as their coach.

Kentucky's five home losses under Calipari were to Baylor and Texas A&M during the 2012-2013 season, to Arkansas and Florida in 2014 and to UCLA this season.

Senior center Moses Kingsley and senior guard Manny Watkins are the only holdovers from Arkansas' 71-67 overtime victory at Rupp Arena three seasons ago. But Kingsley was the only one who played.

"We just did of good job of hanging around and hanging around," Anderson said. "Before you know it, the game got into overtime, and we found a way to make some plays in the end."

Kentucky 6-3 freshman guard Malik Monk, a Lepanto native who starred at Bentonville High School, is averaging 22.6 points per game to lead the SEC.

Sophomore guard Isaiah Briscoe is Kentucy's veteran starter, at least by its one-and-done standards, and is averaging 15.3 points and 3.8 assists.

"Overall we've played pretty well to be starting four freshmen," Calipari said. "The problem is, they'll be stretches where I look at us and say, 'Wow,' and then other stretches that I basically believe I'm in Las Vegas watching an AAU team play."

Calipari said it's his job to make his young players understand how they have to play to win at the highest level and put together a complete performance.

Kentucky has dominated in its first two SEC games, opening with a 99-76 victory at Ole Miss before beating Texas A&M by 42 points.

"They come at you in waves and they play very, very fast," Rebels Coach Andy Kennedy said. "Coming into the game, we tried to tell our guys that. But when they experienced it on the court, it was too late."

Kentucky forced Texas A&M into a season-high 25 turnovers and outscored the Aggies 35-2 in points off of turnovers.

"They're the fastest team in the country going from defense to offense," Texas A&M Coach Billy Kennedy said.

"I think it's a great experience, especially coming from junior college and seeing those type of games on TV," he said. "It's an historical arena. I'm just excited to play in it."

Anderson said no one probably gives Arkansas a chance to win at Kentucky.

Anderson said playing with poise is vital for the Razorbacks.

"Just stay true to who we are," he said. "That's the bottom line. Emotions are going to be a big part of any game, but then you've got to play basketball."

ARKANSAS MEN VS. NO. 6 KENTUCKY